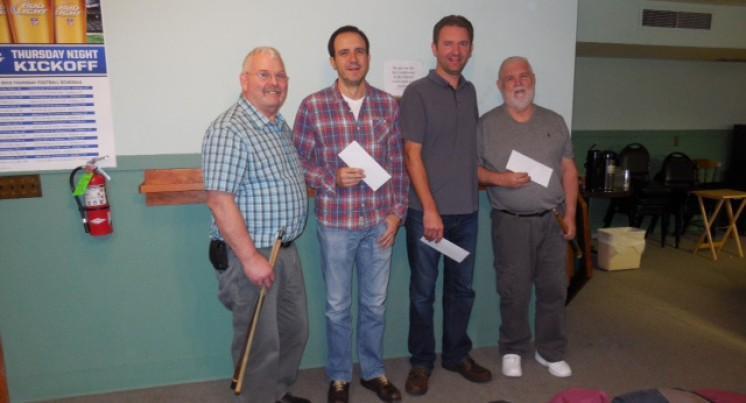 The Russ Guppy Memorial USBA Endorsed Tournament was held in the Hood River Oregon Elks Lodge on November 13-15, 2015 including both B & C players. The B Finalists are pictured above (L to R) Jeff Bradford, Ertan Tarhan, Ramses Verlinden, and Tom Thomsen.

Twenty-one players from Oregon and Washington states were divided into three flights of seven. In each flight there were two player levels competing for two prize pools, C/C+ and B/B+. There were four in the first level and three in the second. A total of sixty-three games were played Friday and Saturday. Darrel Stutesman and Kevin Hay shared a spot, as Darrel is recovering from knee replacement surgery. Stutes was able to play only one game, which he managed to stumble out 25/24! Kevin Hay played all of the rest of the games.

As usual, Harvey Wixman and the Hood River Elks showed us tremendous hospitality, and we thank them for another great event. We will all be looking forward to the Spring Tournament! A fabulous meal was served Saturday evening, and then we finished the final four games of the flight play.

Sunday began the finals and we tried something new: a single elimination finals, bringing up two C/C+ and two B/B+ from each flight to the finals. In order to make it work, we gave the two players with the best records of the six a “BYE” in the first round. This was determined by win/loss, points scored, and fewest points against. Several finalists were determined by the latter!

The finalists for the B/B+ in order of flight play were: Tarhan, Verlinden, Thomsen, Bradford, and Kille.

The finalists for the C/C+ in order of flight play were: Wixman, Kenney, Ehlers, Hopkins, Law, and Hay.

For details on win/loss and scores, please CLICK HERE to see the charts supplied by Mark Williams. Thanks to Mark and Harvey, as well as Tommy Thomsen, for their help. It seemed to go very smoothly once we got moving, and we may incorporate this method into the Tacoma and Ashland tournaments.

Congratulations to everyone, especially those who came into the money, and some for the first time!!!