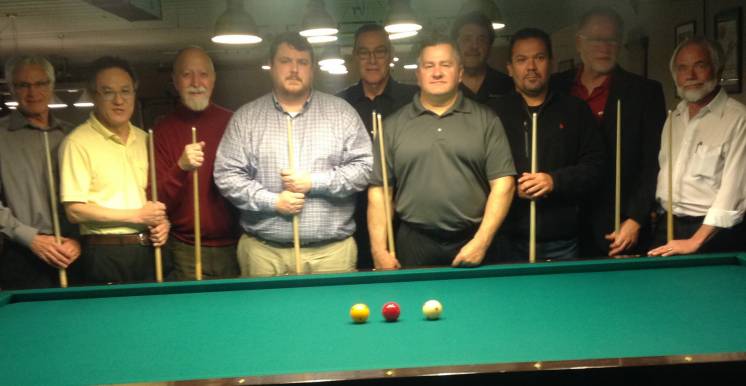 When George Ashby and Gary Eake were looking to make there Spring Rushville Three Cushion Tournament something special they enlisted the help of there friend Paul Frankel (aka Professor-Q-Ball.) The result was the spring tournament held at Rushville Billiards March 4-6 was more than just about producing a tournament winner. The event itself continued its tradition of being a winner to players and fans alike.

The March tournament in Rushville Illinois attracted 28 players to the warm and friendly atmosphere of Rushville Billiards. With former US Champion George Ashby both directing and playing, everyone geared up for a challenging and competitive three days of billiards. The 28 players were split into four flights of seven for round robin preliminaries. The top two from each flight along with the two best third place finishers moved on to the final rounds. (Our Image Gallery below includes a complete players list, charts and pictures from the event.)

The ten finalists, (Pictured above left to right: Jonathan Anderson, Nam Cho, Adrian Viguera, David Tucker, Jim Bishop, Brian Haff, Fred Lamers, Lupe Cruz, Gary Eake and George Ashby) went on to another round robin flight! All we can say is wow... 6 games in the prelims and 9 games in the finals! That's a lot of billiard joy!

What Made The Rushville Tournament So Special?

Unlike other tournaments in the US, the Rushville event is supported by all the players in many ways. Probably the most significant is the players willingness to volunteer by keeping score and recording innings while they were idle in any round. That means the statistics for the event are complete for both Prelims and Finals. Here are the key stats on the event:

The Rushville event was also unique because it honored more than just the top players from the finals.  Several players received cash and recognition in different categories: 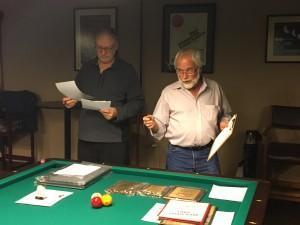 Rushville is truly a coming together of lovers of the game. Gary Eake and George Ashby performed the tournament director duties and ran an exemplary event. And the tournament and large prize fund would not have been possible without the generosity of the many sponsors, including:

With Ashby winning the prelims and having the highest average he looked favored to win the event. But Fred Lamers stepped up with his best game and went undefeated in the 10-man final round robin flight to win the event and the $1200 first prize. Here are all the payouts:

The players and organizers are already talking about the next Rushville event, maybe as soon as October. See you there!

For more pictures from the event visit our good friend Professor-Q-Ball!