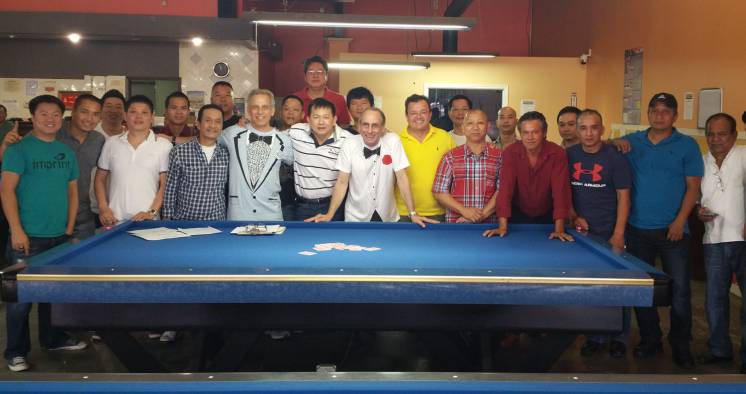 On Saturday May 14 tournament play roared back into Houston as 20 players met for a handicapped event at Bida Goodays, directed by room owner Tim Nguyen. Jorge Gonzalez emerged as the winner out of the C entries. Cong Nguyen (A) was 2nd, Dung Nguyen (A) was 3rd and Lan Vo (B) was 4th to round out the top finishers. Lan Vo also took high run honors and the $100 prize for his run of 8.  (Captions for the players pictured above can be found in the Image Gallery below.)

As many of our regular readers know, Houston has more than a dozen carom rooms and more than forty 10-foot heated tables in town. Unfortunately, tournament action has always been pretty sparse. Tim Nguyen, owner of Bida Goodays at 13442 Bellaire Blvd aims to change all that. His two-step plan: First, recover his Gabriels and Chevillotte tables with Simonis 300 Rapide cloth; then hold a handicapped event with multiple cash prizes and serve lunch and drinks to the players "on the house!" The run-up to the tournament generated a huge buzz around Houston with the result: the plan was more than a success.

Attracting additional prize sponsors from the likes of Professor-Q-Ball (Paul Frankel) and two local players Doug Deitel and Jay Karahan, Tim added another $100 for high run and the event was quickly over-subscribed! When Saturday morning arrived, the official count was twenty players who paid the $50 entry fee and were grouped as follows: five players entered as A, eleven as B and four as C. With the goal of completing the competition in one day the format for the 20 player event was declared:

The flights from the random draw and the players' handicaps were:

The ordered standings at the end of the prelims for the 1st and 2nd place contenders looked like this:

Two of the A players Nam Pham and Thanh Vu were eliminated. In spite of his loss, Joel Rivera made it through, as did Nacho Galindo. Jorge Gonzalez showed early signs of his strength by losing only one game to Galindo 18-17, thus taking the flight on the tie-breaker. The top eight then moved on to the finals.

The finals were setup as an 8-man single elimination. In the quarter-final round Dung Nguyen (A) out shined Joel Rivera (A) 18-9 and moved to the semi-finals. Cong Nguyen (A) dispatched Tu Huynh (B) 18-12. Jorge Gonzalez (C) frustrated Huy Nguyen (B) 18-8 to move on. And Lan Vo ended Nacho Galindo's hopes 18-14 in their "B-B" match-up. To determine 5-6 prize money from the quarter-final round losers Tim held a shootout from the break with the four defeated players. Joel made 1 on his 2nd attempt while Tu missed, so Joel shared 5-6 place with Huy who also needed two rounds to beat Nacho 3-1.

The semi-final round pitted Dung Nguyen (A) and Cong Nguyen (A) in the first match. Cong had the stronger game and won 18-9 to reach the finals. In the other semi-final match-up Jorge Gonzalez (C) played tough and consistent to best Lan Vo (B) and the final two players were set for battle.

The final match of the tournament was dramatic -- Cong Nguyen (A) versus Jorge Gonzalez (C). By this time the crowd knew that Gonzalez was playing over his handicap... and that Cong had a tough match ahead. But no one could have guessed that Jorge would win the lag, break... and run 6(!) putting Cong in a deep hole. Frustrated but determined Cong fought back and caught Jorge at 14. But a few innings later, tied at 16, Jorge put the last two billiards together to win the tournament.

With so few events in Houston to draw experience from, handicapping players is at most an educated guess. Jorge Gonzalez performance in this tournament was at the top of his game and as a result in future events he will play as a B player. We hope that Houston will hold many more tournaments and in fact even begin to maintain innings and averages so all the players can measure their performance against each other and against the rest of the country's 3-cushion billiard community. With the large number of players and tables in Houston, there is no reason Houston cannot grow to become one of the strongest 3-cushion billiard cities in the US. 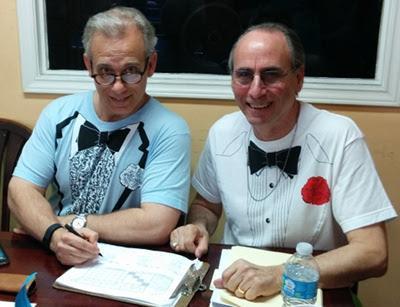 Thanks to room owner and tournament director Tim Nguyen and his brother Eric Nguyen for their generosity and hospitality. The tournament mechanics went smoothly, the tables played great, and the pizza and drinks never seemed to end. Thanks also to Professor-Q-Ball, Mr. Paul Frankel who immediately offered a donation to the prize fund when he learned of the planned event. His donation to the tournament and continued support of the game are unmatched and much appreciated. And finally thanks to Jay Karahan (left) and Doug Deitel (right) who donated to the event and provided all the scoring and record keeping as well as demonstrating a flare for fashion.

Thanks to Jay Karahan for the player pictures in the Image Gallery below.