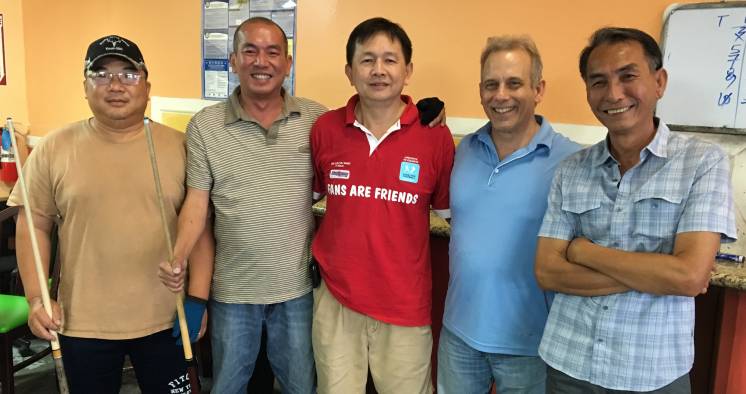 After the great success of the open handicapped event at Bida Goodays in May, the local players asked owner Tim Nguyen to host another event. And so Tim went one better and scheduled TWO! For the C (and B-) players the first tournament took place, Saturday, June 4. Pictured above were the four finalists with owner Tim Nguyen. (L to R) Philip Nguyen (2nd), Nhut Nguyen (3rd-4th), Tim Nguyen (room owner), Jay Karahan (3rd-4th) and Tuan Tran (1st)

The entry fee was the usual $50, and for that the players had an afternoon of billiards, along with food and drink. The twelve players who signed up were split into 4 flights of 3 to play round robin, with the top two from each group moving on to an 8-man single elimniation finals. Tim handicapped the players to play to 13 (B- players), 11 (C+ players) 10 (C players) and 9 (C- players).

With short games anything can happen, and some games were very close. The eight players who moved on to the finals all won at least one or both of their games in their group. Only players who did not win a prelim round game failed to move on.

After the first round the four who made it through were Philip, Nhut, Jay and Tuan. Tuan met Jay in a match with Tuan playing to 13 and Jay to 10. Although Jay had some very strong play to reach that point, but Tuan proved daunting as he left tough positions when he missed, and strung together some runs to take a big lead. And so Tuan emerged the winner to reach the finals. The match between Nhut and Philip was much closer and tougher fought, with Philip prevailing, Leavin Nhut to share 3rd-4th place with Jay.

By the time the final match came about truly the two best players in the event remained on the battle field. Philip and Tuan were both playing to 13. At first the players were cautious, feeling each other out. Then Tuan struck with his first short burst to take a lead he would never relinquish. Although Philip played defensively and tried to mount a comeback, Tuan was the victor. The tournament and top prize went to Tuan Tran, our C-Handicapped Event champion. The prize money was: 1st place $150, 2nd place $100 and 3rd-4th place $50 each. 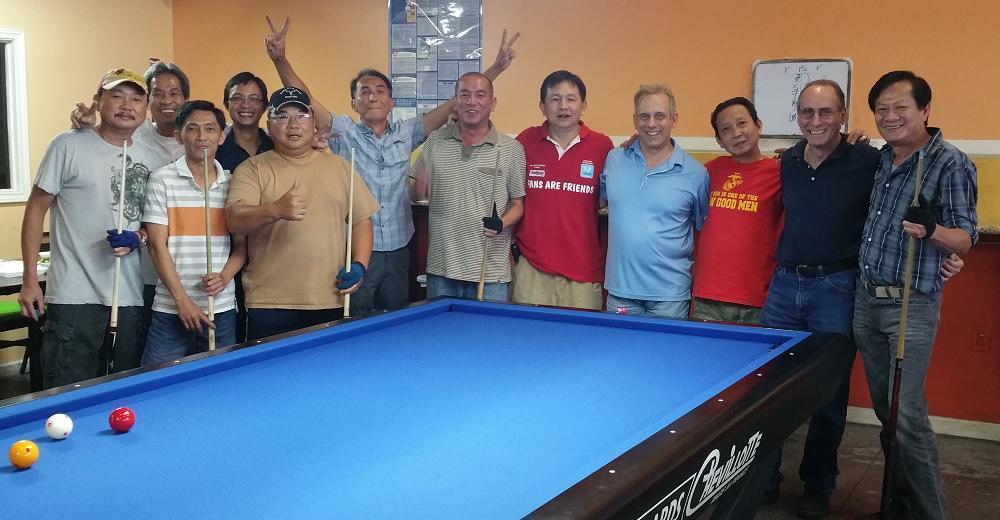