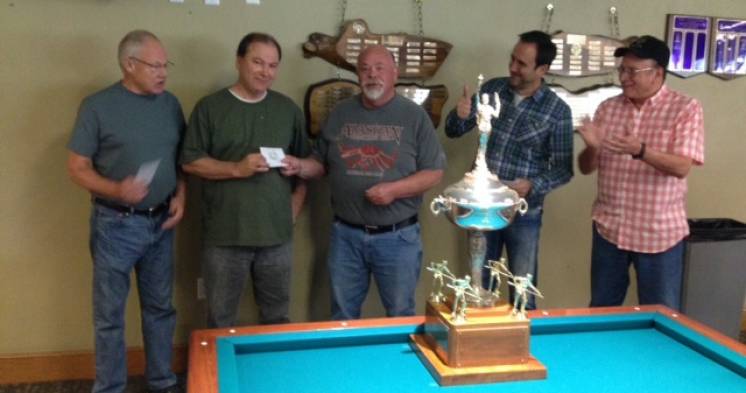 The 2016 Northwest Elks Invitational 3-Cushion Billiard Tournament was held at the Tacoma Elks Club June 10-12. The event has more than fifty years of tradition for Elks Club members and lovers of three cushion billiards. But even tradition had a beginning and this year the organizers decided to spice up the event with some format changes. The results were well-received and another successful NW Elks event goes down in the record books. Here is a recap from the tournament director.

After many years of traditional game formats, (for example race to 25 or 30,) this year we tried 15 Point Games, race to two wins. Because we were unsure of the time elements, we limited the field to 14 players. This turns out to be the ideal field for players of our range ( .350-1.00), using four tables. Half of the Matches went two games, which means half went three games. We had set up the tournament to play the first game of each Match then proceed to play the second, and third if required. However, at the players meeting on Friday the group decided they would like to play three complete Matches each day. This caused delays between games and some consternation among those who had to wait. If we do this again, it will be fewer points per game, or play the first game through the flights as originally planned to keep everyone actively playing.

Matt Lind won the long-drive award for coming all the way from Minneapolis, Thanks Matt! Daniel Yoon came from Camas, WA, entering his second tournament. Tommy Thomsen drove from Medford, OR and played his heart out. We are very fortunate to have a decent place to play the game we love, and an outstanding group of people who make it enjoyable. 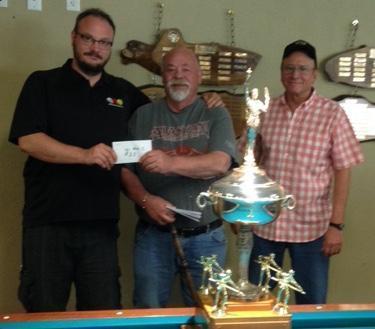 High-Run prizes were awarded to both C and B/above players, Matt Lind won the C High-Run with a 5; while Monty Rodriguez won the B/above with a 7 run. Note that a 7 is almost half the game!

The Finals were made up of the top two finishers in each of two flights. Red Flight included Ertan Tarhan and Mark Sullivan, the Blue Flight brought Jesus Quinonez and Montezuma (Monty) Rodriguez. First Place was Jesus Quinonez, Second Place Ertan Terhan, Third Place Mark Sullivan, and Fourth Place went to Monty Rodriguez. We paid four places so everyone in the finals cashed.

This was not a USBA Tournament as it has been a traditional Elks tournament for over 50 years. The field for Elks players has been diminishing over the years so we have opened this tournament up to Elks and invited guests.

We want to invite players from all over the USA to join us for the Mike Fahey Memorial USBA Tournament August 5th through August 7th at the Tacoma Elks Club.

Thanks to all those who made this tournament possible and those who worked to make it run smoothly! Submitted by Tim Poole, Tournament Director