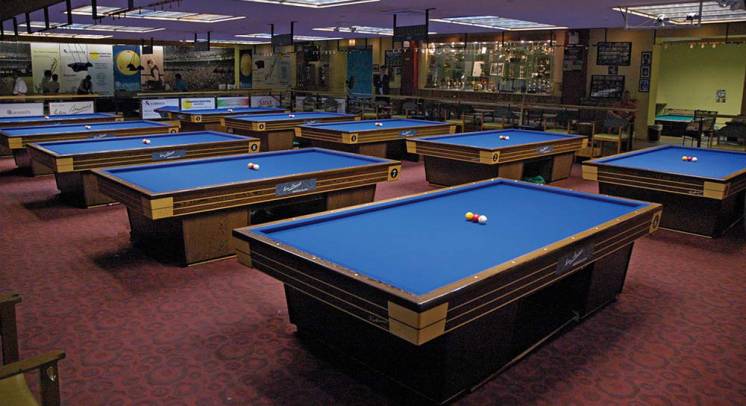 The 2016 Verhoeven began August 1, 2016. Held at Carom Cafe Billiards in Flushing New York, the event brings the world's best players to the United States to battle for six days. The champion will take home the trophy and the $9,000.00 first place prize. The event attracted 105 players this year (plus five seeded entrants) and will be held in three stages: First the 105-player preliminary qualifications, followed by the 40-player semi-finals (both in round robin format,) and finally a 16-man finals in single elimination knock-out format. Continue reading for results and our complete re-cap.

Click here for the complete charts for the finals - including all consolation rounds!

Complete details of the entire event including all players lists, daily schedules and end-of-day results charts follows below below. (Each day's results can be accessed separately - click the links to display or download the charts!)

QUICK LINKS FOR PREVIOUS ROUNDS: Some of the fans asked us to keep the chart links up top... here they are!

Click here for the official charts for all 15 flights in the Qualifications stage.

Click here for the official charts for the 5 flights in the Sem-Final stage.

Players: Click here for the complete list of all players grouped for the qualification round (Groups A-O)

Schedule for Monday: 127 matches will take place in the Qualification stage. Matches begin at 9:30am and run until 9:00pm or until all matches are completed. Click here to see the schedule for all qualification matches to be played on Monday, August 1, 2016

Results End-Of-Day Monday: With the first day completed the interim result charts have been posted. The best game of the day honors was shared by three players who all managed 25 points in 8 innings for 3.125 -- Tayfun Tasdemir (TR), Jae Ho Cho (KR) and little known Keon-Hwi Cho (KR). High run for the day went to Jae Ho Cho at 13. Four players managed runs of 10 or more and there were 8 games played at better than 2.000 - three by Tayfun Tasdemir who led all players with a 2.679 overall average. Click here for the charts of all qualification matches through Monday evening.

Schedule for Tuesday: 128 matches will take place in the Qualification stage. Matches begin at 9:30am and run until 9:00pm or until all matches are completed. Click here to see the schedule for all qualification matches to be played on Tuesday August 2, 2016

Results Mid-Day Tuesday: Mid-day charts have been posted. There will be a final end-of-day posting of Tuesday results (with our re-cap) when play completes later this evening. Click here for the charts of all qualification matches through Tuesday mid-day.

Results End-Of-Day Tuesday: The Tuesday matches are over and another exciting day at the Verhoeven Open comes to a close. Best game of the day, and of the event so far, along with high run honors goes to Dong-Koong Kang of Korea who posted a 25-1 win in 7 innings (3.571 average) with a high run of 13. Tayfun Tasdemir of Turkey continues on a torrid pace and is the only player with a grand average over 2 at 2.404. The following players all have 5-0 records with one game remaining, which means they are all but certain to advance: Michael Kang (US), Hugo Patino (US), Tayfun Tasdemir (TR), Jae Ho Cho (KR), Jeremy Bury (FR), Martin Horn (DE), Dong-Koong Kang (KR), Huberney Catano (CO), Quyet Chien Tran (VN), Keon-Hwi Cho (KR), Roland Forthomme (BE), Murat Naci Coklu (TR), Sonny Cho (US) and Semih Sayginer (TR). Keon-Hwi Cho is in the group with Korean star Heang-Jik Kim who lost to Cho and was upset by American Chris Bartzos. With a 3-2 record and one game remaining Kim is on the brink of elimination. The other big upset of the day was Brian Knudsen of Denmark over Nguyen Quoc Nguyen of Vietnam. In that group Knudsen and Nguyen are now both at 4-1 with one game remaining. The other potential winner in that group is William Oh (KR) who is at 4-0 with 2 games remaining - a tough group indeed.  The remaining players who will advance to the semi-finals will be decided in the final qualification games that take place Wednesday morning, so look for some very determined play.  Click here for the charts of all qualification matches through end-of-day Tuesday.

Schedule for Wednesday: 60 matches will complete the Qualification stage. Matches begin at 9:30am and run until about 2:00pm or until all matches are completed. At 3:00pm there will be a group photo session. At 4:15pm the auction and lotto will take place. The semi-final rounds will begin at approximately 4:30pm. Click here to see the schedule for all qualification matches to be played on Wednesday August 3, 2016

Results Complete - Qualification Flights: The Qualification round is over and the 15 flights each have a 1st and 2nd place winner who will move on to the next stage - the Semi-Finals. In addition, the two best third place finishers based on the official tie-breaking formula also move on. Highlights of the final qualification rounds: Tayfun Tasdemir finished in grand style winning his flight with a perfect 6-0 performance, posting the high run of the stage and the event so far with a run of 14, and finishing with the best overall average 2.419. Tasdemir was the only player to finish with an average over 2.0. 2016 USBA National Champion Hugo Patino also finished with a very strong performance winning his last match 25-1 in 7 innings (3.571 average) equaling Dong-Koong Kang's Tuesday effort, also with a run of 13. Click here for the complete Qualification stage results charts.

Results - Ranking After Qualfications: Click to see the final ranking order with the auction and lotto winners who make up the 35 players that enter the Semi-Final round.

Players: With the beginning of the semi-final round the seeded players enter the tournament. Frederic Caudron, Torbjorn Blomdahl, Eddy Merckx, Dick Jaspers and Raymond Ceulemans join the 35 qualifers to begin the second stage. Click here for the complete list of all players grouped into five flights of 8 for the semi-final round.

Results End-Of-Day Wednesday (Semi-Final Play): Interim charts have been posted. We will continue to update the five flights as new information is received. Click here for the charts of the five semi-final flights through end-of-day Wednesday.

Schedule for Thursday - Semi-Final Phase: 60 matches will continue play in the Semi-Final round robin stage on Thursday. Matches begin at 10:00am and run until about 6:30pm or until all matches are completed. At 6:00pm Happy Hour Begins... but for us, every hour is happy hour when we can watch great 3-cushion billiard play! The semi-final rounds will finish on Friday to make way for the 16-man knock-out finals. Click here to see the schedule for all semi-final matches to be played on Thursday August 4, 2016

Results Mid-Day Thursday: The top stars are the top players in early semi-final round action. Best semi-final game so far was Dick Jaspers over Michael Kang 35-16 in 9 innings (3.889 average) with a run of 13. Highest run for the entire event (so far) goes to Semih Sayginer over Hugo Patino winning 35-17 in 10 innings (3.500 average) with an elegant run of 18! In Group A Frederic Caudron posted a 2.059 game with a run of 10. In the same Group A, Jae Ho Cho is also unbeaten and posted a run of 10. Torbjorn Blomdahl cruises through his first two matches in Group B with a 2.121 overall average and is matched by Quet Chien Tran in the same group who has a run of 10. Eddy Merckx in Group C is averaging 2.121 after two games as is Sayginer who we highlighted earlier. Jeremy Bury remains undefeated as well and joins the run of 10 club. From Group D Jaspers efforts already noted lead the way. Tasdemir is undefeated seeing only his 2nd match of the entire event under 2.000. Nguyen Quoc Nguyen posted a run of 14. In Group E Raymond Ceulemans came back from a 34-23 deficit putting up 2-5-5 in his last three innings to beat Roland Forthomme 35-34 when Roland could not close the match out. Dong-Kong is averaging over 2.000 and has a high run of 11. Click here for the mid-day charts of all semi-final matches through Thursday afternoon.

Results End-Of-Day Thursday: Eight rounds are now complete in the semi-final stage. The undefeated players (all 4-0 at the midway point) with the best chance to move on to the finals: Group A - Frederic Caudron, Huberney Catano & Jae Ho Cho; Group B - Torbjorn Blomdahl, Quet Chien Tran, Keon-Hwi Cho; Group C -  Eddy Merckx, Semih Sayginer; Group D - Dick Jaspers, Tayfun Tasdemir, William Oh; Group E - Murat Naci Coklu. Best game Dick Jaspers 35 in 9 innings for 3.889. High run Semih Sayginer 18. Averaging over 2.0 Dick Jaspers 2.090, Eddy Merckx 2.029, Semih Sayginer 2.000. Raymond Ceulemans has come from behind twice (5 and out and 11 and out) to get to 3-1 record... he is a contender to make the finals. Click here for the charts of the five semi-final flights through end-of-day Thursday.

Schedule for Friday - Semi-Final Phase: The remaining matches continue play in the Semi-Final round robin stage on Friday. Matches begin at 10:00am. Second round at 11:30am. More will be posted soon. The semi-final rounds will finish today to make way for the 16-man knock-out finals. Click here to see the schedule for the early semi-final matches to be played on Friday August 5, 2016

Results As Of Friday Morning: Small update with ninth round matches added. Click here for the most recent charts of semi-final play through Friday morning.

Results After Round 10 Friday: Small update with tenth round matches added. Click here for the most recent charts of semi-final play through Friday mid-day.

Results After Round 11 Friday: Eleven rounds complete - more results! Click here for the most recent charts of semi-final play through Friday afternoon.

Results Through Friday Evening: Thirteen rounds complete - one more to go! Click here for the most recent charts of semi-final play through Friday evening.

Results Semi-Finals Are Complete: Five Flights - 40 players - only 16 move on to the finals tomorrow! Click here for the official charts of the complete semi-final stage.

Players - Final Ranking in the Semi-Finals: Click here to see the list of players who advance to the finals tomorow.

Schedule for Saturday - The Finals: 8 matches start the day in the round of 16. Click here to see the schedule for the finals.

Players and Matches - Finals: Jeremy Bury defeats Dick Jaspers in the final match to win the 2016 Verhoeven Open Tournament. Click here for all match results in the finals including all consolation rounds.

And don't forget to read our story about Jeremy Bury's exciting march to victory!