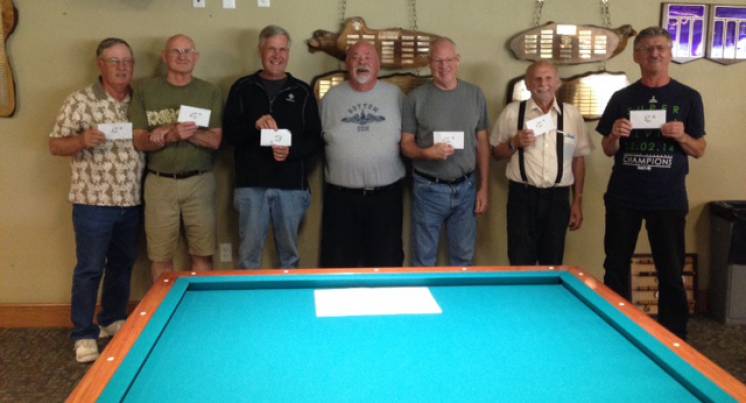 Three cushion billiards is alive and well in the Pacific Northwest. And once again the Tacoma Elks Club has demonstrated its consistent support and love for the game in the form of the annual Mike Fahey Memorial Tournament. Here is a quick re-cap on this USBA handicapped event and some updates on upcoming activities from tournament director Tim Poole.

"We had a great time and a very competitive field of 13 players. We learned a lot from this tournament about the format for our tournaments going forward. Traditionally we hold these events 4 times per year and they are three-day events. This event we used 50 innings as the length of the games, and it made a huge difference in the speed and flow of the tournament. We will use this as our new standard for these events, and we will be able to play two flights of 9 players and finish the event in two days. This means that our next tournament will be Saturday and Sunday only, which we hope will allow more of our players to enter without taking a day off work. We also will drop the "equal innings" as it is way too confusing. The tie breakers will be Head-to-Head, Most Points Scored, Fewest Points Scored against.

We hope that many of you will take this opportunity to send in your entry for the Ashland Fall Tournaments, beginning September 24th. We really need your help in filling the Team Tournament, this may be it folks if we don't get the players needed to warrant the work involved. The USBA Tour Event is filling up fast, so if you want to be there you had better send in your check to Mark Williams pronto! There are no promises to pay accepted, your check is your only way of securing your entry. I would strongly suggest that if you want a chance to get into the money you consider playing in the Team Tournament so you will know all the tables -- it is a real advantage!

Look over the images in the gallery below. Check out the photos of the Finalists and High-Run winners. The order of finish was: Sullivan, Olson, Wixman, Fleming, Speidel, and Scott. High Run in C/C+ was Dave Ehlers (7), and B was Mark Sullivan (6). We had a new player who shows much promise and we hope he returns soon. His name is Dustin Tran he lives in Vancouver, WA, but hails from the Houston area. He is Vietnamese by ethnicity, and a very nice young man. As he was an unknown talent we erred on the side of caution and placed him in the top when he played at the next level below. Had I given him the correct handicap, he would have placed higher, he has game!" - Tim Poole

Keep watching the 3cushionbilliards.com event calendar for more events coming out of one of the most consistent and well-managed tournament locations in the country.