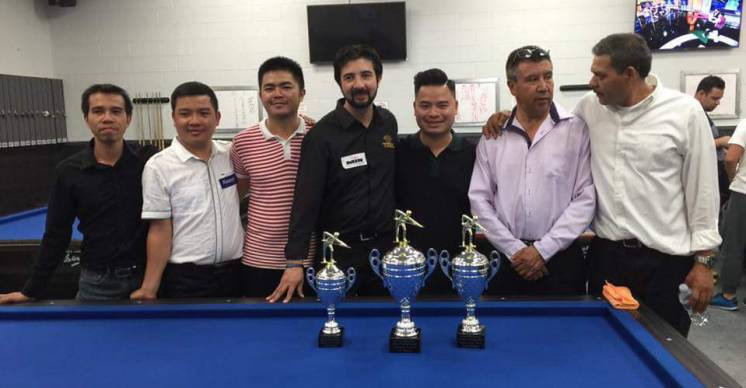 After the completion of the Verhoeven Open Tournament in New York, three visiting players from Vietnam - Chien Duc Anh Nguyen, Quyet Chien Tran and Nguyen Quoc Nguyen - traveled another 3,000 miles back across the country to Garden Grove, California. There they participated in another International Open tournament with players from the United States and Mexico. Continue reading for results and our re-cap of the tournament.

The event attracted 35 players who were divided into 5 flights of 7 playing round robin to 30 points in the qualification stage. The top 2 from each flight advanced, along with the 2 best 3rd place finishers. One auction winner and one lotto winner completed the 14 players who advanced to the second round robin qualifying stage. The 14 in stage two were divided into 2 flights of 7 playing to 30 points. Finally, the top 2 from each stage 2 flight advanced to a dramatic single-elimination semi-final match to 40 points, followed by the championship game.

The single elimination semi-finals brought some very exciting matches. Pedro Piedrabuena vs Nguyen Quoc Nguyen in one game and Luis Miguel Avila vs Chien Duc Anh Nguyen in the other. Luis Miguel Avila dominated his opponent all throughout the match finishing 40-26 in 20 innings. Pedro and Quoc Nguyen traded the lead back and forth until Nguyen made a final sprint to the end with runs of 8 and 5 to come out on top 40-31 in 20 innings. That set the stage for the championship final match.

The final pitted unbeaten Luis Miguel Avila against Nguyen Quoc Nguyen. At the point Nguyen had already lost twice in the earlier rounds, but played excellent in his semi-final game. You could not ask for a more exciting final. All the Hispanic spectators were rooting for Mexico's Luis Miguel Avila while the Vietnamese spectators were rooting for Nguyen Quoc Nguyen. Nguyen began the match by jumping out to a 16-6 lead in the first few innings. But then Avila ran two sixes and a four to reach the midway break ahead of the Vietnamese player 22-17. In the second half of the match, Nguyen played perfect, running back to back eights and finishing 40-31 in 19 innings. When the final carom was made, and Nguyen was the champion, the crowd erupted in joy...even the Hispanic spectators, who were rooting for Avila, cheered for the champ. How could they not? Nguyen is one of the nicest players anyone could meet.

Congratulations to the winner Nguyen Quoc Nguyen and a big thanks to all the players and spectators who made this West Coast International open tournament a great event that all hope will return again soon.

Check out the pictures and the second stage qualifying charts in the Image Gallery below.