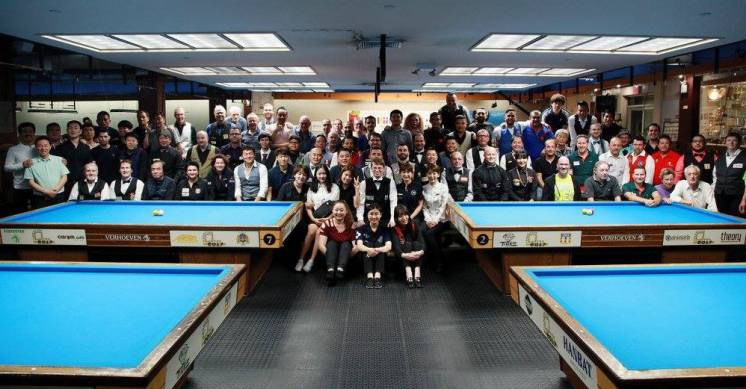 The 2017 Verhoeven attracted its largest field ever - a total of 137 players. 41 players from the United States met 96 players from around the world in a week of non-stop billiards. We say non-stop and we mean it. The tournament format with two round robin stages and a knock-out stage is truly unique. Add to that the electric atmosphere of the historic Carom Cafe in New York and you have one of the greatest - and strongest events - ever played on U.S. soil.

Six of the world's best - European stars Dani Sanchez (#1), Dick Jaspers (#2), Frederic Caudron (#4) and Torbjorn Blomdahl (#6) along with Koreans Sung Won Choi (#15) and Jae Ho Cho (#16) - were seeded into Stage 2. The remaining 131 players did battle in the Qualifications (Stage 1) divided into 22 groups of 6 playing round robin to 25 points. (In case you're doing the math, one player did drop out.) The top two from each group plus the next best three 3rd place finishers moved to the semi-final stage. An auction was held as well as a lottery for 3 additional spots to round out the number of players who advanced to 50.

In the semi-final stage that followed, the 56 players were divided into eight groups of 7 playing round robin to 35 points. The top two from each group moved on to the Main Event, a 16-man single elimination knock-out format with games to 40 points. Here are some of the high... and low points... in the run-up to the main event.

Highlights from the Qualification Stage

Best game honors went to Dinh Nai Ngo of Vietnam for his match with Kang Lee where he went 25-10 in 6 innings with a run of 10 and a 4.167 average. Ngo advanced winning his group. High run honors went to Lars Dunch of Denmark. In his match against U.S. player Steve Kreditor, Dunch ran 14. Still, Dunch could only place third in the group and so did not advance. The most crushing loss had to be the one suffered by U.S. player Jerry Geist at the hands of recent World Cup winner Heang Jik Kim. Kim won 25-0 in 16 innings. Hey... it happens!

Click to view the final result charts for all 22 groups.

Click to view the final ranking of the 50 players who advanced.

Highlights from the Semi-Final Stage.

With the entry of the big guns, and the advance of the best from the qualification round, the quality of play really kicked up. Higher averages, higher runs, and some real fireworks were in store with only two spots from each group able to advance.

Best game honors went to World Champion (and world #1) Dani Sanchez who topped Ramon Rodriguez of Peru 35-28 in 8 innings for a 4.375 average. The heartbreak of course was for Ramon, who posted one of his best efforts ever scoring 28 billiards in 7 innings to average 4.000 in that losing effort. High run honors, with runs of 16, was shared by Huberney Catano of Colombia and Hugo Patino of the United States. Neither was able to advance from their groups though. The most crushing defeat was the 35-1 loss suffered by Quoc Vinh Tran at the hands of his countrymen Dinh Nai Ngo. The links that follow give you the entire picture for all the games and the final rankings.

Click to view the final result charts for all 8 groups.

Click to view the final ranking of the 16 players who advanced to the final round.

Entering the event from the Qualification Round meant a player could potentially play a total of 15 games on the way to winning the championship. (A seeded player of course would only have to play 10 games.) So it is interesting to note that Heang Jik Kim, Dong Koong Kang and Duc Anh Chien Nguyen all went undefeated in their qualification round groups. And each further matched that feat in their semi-final groups to enter the final stage without a single loss in 11 games!. But the final stage is quite different... in fact its just one loss... and you're out. Will an undefeated challenger go all the way? Or will one of the seeded players live up to their reputation (and expectation) to take it all? Our coverage of the 2017 Verhoeven Open continues in Part 2 where we watch the drama and excitement as the players battled for the top spot and the $8,000 first place prize money.

Thanks to Kozoom for the live-stream on all 11 tables and for replays of key matches available to premium pass members. And kudos to Charles Brown the exemplary Tournament Director who consistently delivers with confidence and professionalism.