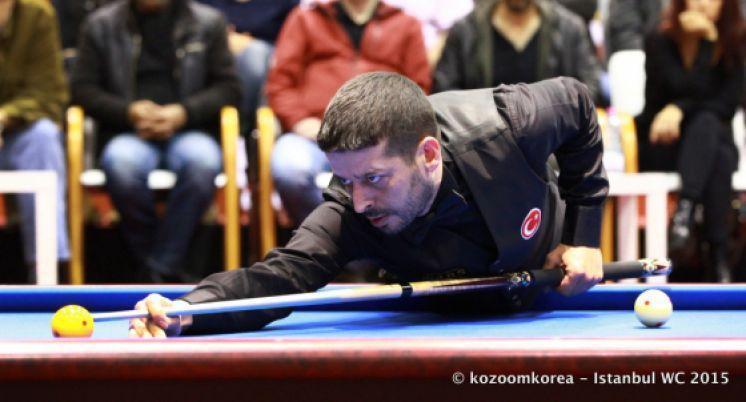 Putting in his best performance to date, Murat Naci Coklu won the 2015 UMB World Cup in front of an adoring hometown crowd in Istanbul Turkey.

2015 will surely be remembered as the year of the Turks, as Coklu becomes the second Turkish player this year to have won his first World Cup event. Earlier in the season, Tayfun Tasdemir put in his best performance to take the World Cup held in Ho Chi Minh City. This time out it was Coklu who had to beat Tasdemir himself in the round of 16 (40-37 in 24 innings 1.666) in order to have his chance at the trophy. In addition to his win over his fellow countryman, Coklu first defeated Nikos Polychronopoulos of Greece (40-25 in 21 innings 1.904) in the opening round of the main event. And in the quarter-finals it was Quyet Chien Tran of Vietnam (40-34 in 28 innings 1.428) who felt the sting as Coklu marched through the ranks to victory.

Perhaps Coklu's biggest challenge came in the semi-finals where he met an absolutely on-fire Dick Jaspers of the Netherlands who then seemed unbeatable. At that point Jaspers was averaging over 2.0 and had the high run of 15 in the tournament. In fact, Jaspers playing white led most of the way, and was the first to reach 40. Stepping up in the equalizer, with nerves of steel Coklu first tied the match at 40, then sent Jaspers home with a 5-4 performance in the penalty round that followed.

In the finals against Roland Forthomme, who last enjoyed World Cup victory back in 2006, the match was again tightly contested. At the break Forthomme led 20-19 through 10 innings, and looked like it might be his day. But after the break it was all Coklu, as he played the perfect combination of offense and defense, shutting down Forthomme's game and taking the match 40-26 in 21 innings (1.904.)

The hometown crowd could have hoped for nothing better, as Coklu held up the Turkish flag in victory, to the cheers of his fans. The Istanbul tournament was a great event and the tournament average of 1.494 shows how tough it is to compete at the highest level in 3-cushion billiards. For those readers who are Kozoom members you can relive the moments in their video section.

Click here to read more about the event on Kozoom.
Story and pictures ©Kozoom
From the UMB here are the final standings of the 32-player main tournament:
Tagged under