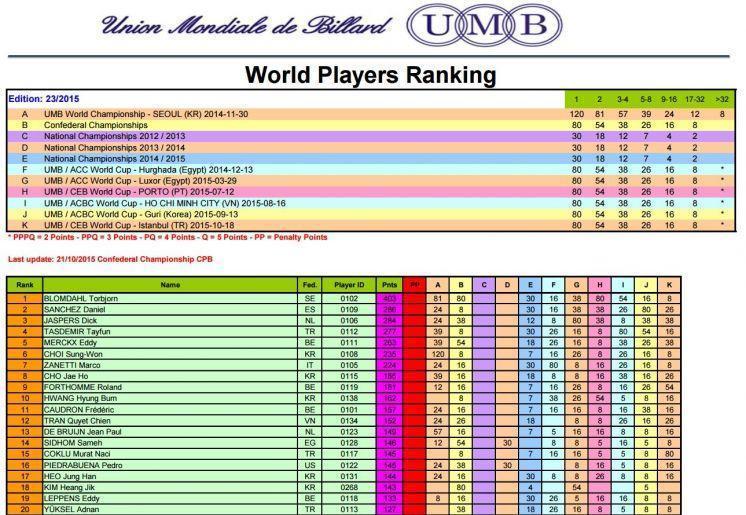 In the latest World Players Ranking released by the UMB today Torbjorn Blomdahl with 403 points remains on top. This latest list includes points earned in the most recently completed World Cup held in Istanbul Turkey. The results from the 2014 World Cup Guri drop off. Despite losing 30 points overall from the last ranking list, Blomdahl still retains a comfortable 117 point lead.

Dani Sanchez moves into second place with 286, followed closely by Dick Jaspers with 284 and Tayfun Tasdemir with 277, all who saw their point totals rise. Eddy Merckx dropped from second to fifth with a net loss of 42 points mostly when his 80 points for winning at Guri in 2014 fell off. US National Champion Pedro Piedrabuena moved up from 18th with 129 points to a tie for 15-16th with 145 points. The top 12 players are seeded into the main event at UMB World Cup tournaments without having to play in Qualification rounds. Moving up into the coveted group of 12 are Roland Forthomme the new #9 and Quyet Chien Tran the new #12. Two Korean players Jung Han Heo and Haeng Jik Kim slip down.

The two most important upcoming events where players can earn ranking points are the World Championship in Bordeaux, FRA and the final World Cup of 2015 in Hurghada EGY, both in December.

For a complete list of the most current rankings as well as access to historical listings, visit the UMB World Rakings page.