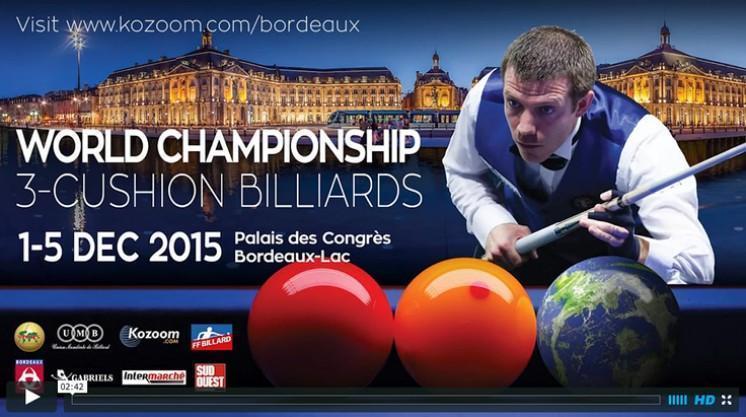 The biggest 3-Cushion Billiards event of 2015, the 68th World Championship, comes to the city of Bordeaux, France December 1-5. The UMB has announced the 48 players inscribed into the event as well as the sixteen 3-man groups for the Qualification round.

Sung-Won Choi the reigning 2014 World Champion is joined by 47 players from the four regions representing 24 countries. Korea from the Asian Confederation has by far the largest contingent, fielding 7 players followed by Belgium from the European Confederation with 4. Along with Choi there are eight more former World Champions who return for another shot at the coveted title: Torbjorn Blomdahl, Dani Snachez, Dick Jaspers, Eddy Merckx, Marco Zanetti, Frederic Caudron, Ryuuji Umeda and Semih Sayginer. Sayginer joins the group by way of one of two wildcard entries offered to the Organizing Federation, the other being Jean Riverchon of France.

This year Pedro Piedrabuena of the USA (Group P) competes for the first time as a ranking player. He is joined by USA's Miguel Torres (Group L) who is one of eight players nominated by the Pan American Confederation.

The event takes place at the Palais des Congres in the beautiful city of Bordaux and is hosted by Kozoom Multimedia Company. Bordeaux is slated to host the championship again in 2016.