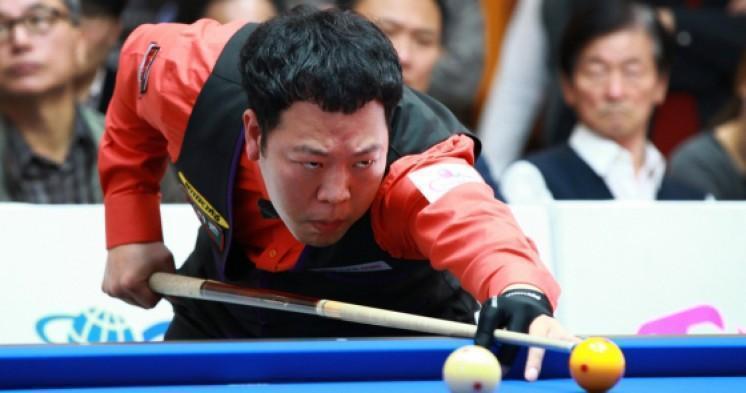 Dong-Koong Kang of Korea wins the LG U+ Cup 3-Cushion Masters Invitational Tournament. In a field that included 5 of the top European players, one Vietnamese and 10 Koreans, Kang proved best in the tournament held November 10-12.

Overcoming both physical challenges and tough opposition on the table, Dong-Koong Kang showed his grit and determination as he made comeback after comeback to win the 40-thousand Euro first prize.

Played in the unusual venue of a shopping mall, the tournament format consisted of a preliminary round of 4 groups of four in round-robin, with the winner of each group going on to the semi-final and final rounds. On the very first day Kang delivered the best performance of all competitors and established himself as a contender to be reckoned with. But then a sudden emergency threatened to upset the entire tournament, as Kang was rushed to the hospital with stomach pains of unknown origin. Overnight it was touch and go and there was great uncertainty as to whether he could continue. However, in what is surely his most important comeback of the event Kang arrived to play the following day and won his last match to top his four-man group, averaging 1.909.

The other three winners of their respective groups were all from the European contingent. Torbjorn Blomdahl finished with three wins and a 1.641 average. Frederic Caudron with a 2-1 record and 2.087 average topped his group. And Dick Jaspers undefeated with the highest average at 2.234 looked very strong as the fourth finalist. (See the detailed prelinary cross-tables here.)

The semi-final match between Kang and Blomdahl was tough fought with both players exhibiting caution, knowing that at any moment their opponent could attack. And it was Blomdahl who unleashed a run of 12 that put him up 24-14 at the break. After both players missed some close caroms Kang mounted yet another comeback, with a run of 8 followed by 4, and suddenly in inning 19 it was 33-32 with Blomdahl's big lead gone. Unfortunately for Blomdahl he could not find his way at the end, and Kang ran 6 and then 2 to close out the match at 40-34 in 21 innings.

In the other semi-final match, Jaspers beat Caudron in a see-saw battle that saw the two titans tied at 33 in inning 18. Then Jaspers stepped up and with calm precision nailed his final run of 7 to win his place in the finals 40-35 in 19 innings.

In the final match between Dong-Koong Kang and Dick Jaspers it was Kang who jumped ahead early. But after a Jaspers run of 9 Kang trailed 24-14 at the break. And then, in dramatic fashion, it was Kang who mounted one final comeback, unleashing a brilliant run of 12 to take the lead. From there he never looked back and finished the match and the tournament with a 40-35 win in 18 innings.

Best game of the tournament was the memorable second round match between Frederic Caudron and World Champion Sung-Won Choi where Caudron finished 35-8 in 8 innings to average world-class 4.375. High run of the event was the final equalizer inning of the match between Dick Jaspers and Semih Sayginer. Jaspers reached 35 and Sayginer ran 15 in his final chance, but fell short 35-34 in 17 innings.

With a prize fund of 80-thousand Euros, the LG sponsored event is one of the most lucrative in 3-cushion competitions. With the open-air mall venue many people were able to stop and enjoy the great matches. And with Kozoom live streaming and posting videos of the events, billiard enthusiasts around the world could enjoy this great event over and over as well.