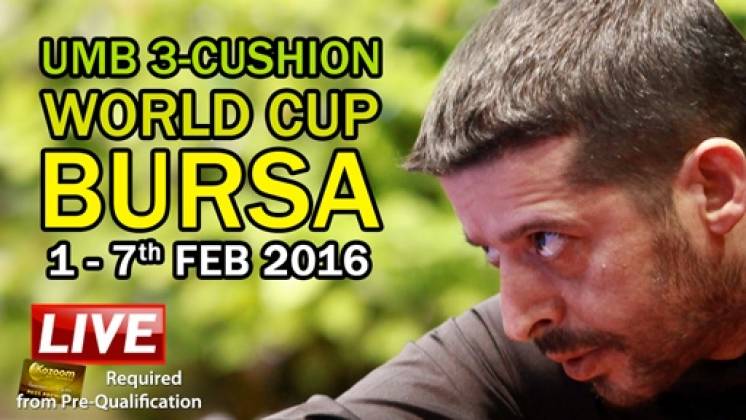 Hosting its first UMB World Cup Tournament, the town of Bursa Turkey prepares for the arrival of the greatest three cushion billiard players from around the world. Who are the ones to watch and what can the crowds expect as the 2016 World Cup cycle begins on February 1st?

Current World Champion Torbjorn Blomdahl of Sweden will be there, as will 2015 World Cup winner Dani Sanchez of Spain. Perhaps the two will eventually meet in the main tournament where they are seeded. If they do, that would be a prelude to their scheduled meeting in the Supercup to be held in Antwerp on March 5th. Along with the Supercup match between Blomdahl and Sanchez the 2015 Player of the Year will be chosen.

But first we have Bursa where already 150 players have been inscribed. According to UMB rules the top 12 players in the ofiicial UMB ranking are automatically entered into the main tournament. They are:

In addition, the Confederations (Panamerican, European, Asian and African) and the organzing country (Turkey) may select wildcard entrants to join the elite 12. The wildcard players for the Bursa event are:

Handicapping an event like a World Cup is very hard. You just don't know how the players will react to the rigors of travel or the challenge of playing on newly covered tables. In addition, with more than 70 Turkish players entered and other top competitors from around the world coming to play in the preliminary rounds, upsets and surprises will no doubt catch a top player off-guard and send him home early. Nevertheless we think recent performance is a good indicator of who might be ready to win it all. With a total prize fund of 25,000 euros and 5,500 going to the winner the elite of the world will be making every billiard count. Here are the ones to watch and why we picked them (in no particular order!)

The Ones To Watch In Bursa

Torbjorn Blomdahl - As 2015 World Champion and 2015 European Champion Blomdahl continues his winning ways. He was also the winner of the Porto World Cup in February 2015. If he is on his game he is hard to stop.

Dani Sanchez - There is a reason Dani won the 2015 World Cup cycle - consistency! The Spanish Champion was the winner of the Guri World Cup in April 2015. And was in the final four in 4 of the 6 events in 2015.

Frederic Caudron - Coming off wins in the Hurghada World Cup in December 2015 and the Belgium Championship in January 2016 he appears to be in top form. His 50-5 in 9 innings win (5.556 average) in a recent Dutch Championship by Teams match says he is ready.

Dick Jaspers - Winner of the 2015 Lausanne Billiards Masters in November 2015, the  2015 Verhoeven Open in July and the Luxor World Cup back in January 2015, Jaspers has exhibited great form recently as well, winning a match over Zanetti 40-11 in 12 innings (3.333 average).

Marco Zanetti - Winner in Hurghada back in December 2014 and 2nd to Caudron in that same event in December 2015 the Italian Champion showed his grit bouncing back from the recent trouncing by Jaspers to post his own win at 40-5 in 7 innings (5.714 average) with a high run of 21 in a January 2016 German league match.

Jeremy Bury - The French Champion posted a 50-16 in 16 innings win (3.125 average) in one of the matches of the current French championship series. Bursa could be the scene of his first World Cup win.

What do you think? Add your comments below.

And don't forget... our friends at Kozoom will stream the event live! The early rounds are FREE to all. A Kozoom Premuim Pass is required from Pre-Qualification on.