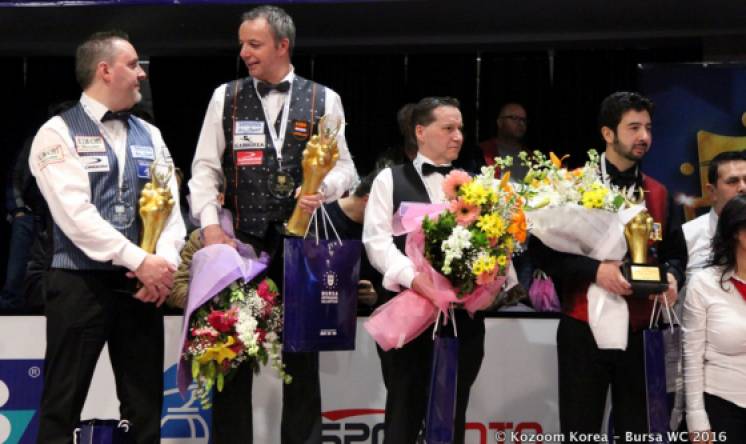 On February 1st when 149 players assembled for the initial World Cup tournament of the season no one could have known what surprises were in store in the beautiful city of Bursa, Turkey. Four days of round robin play ensued to open the tournament. Through these early qualification rounds the field was whittled down to 15 players who moved on to the main tournament. The 15 who made it through qualifications joined the top 12 seeded players and 5 wildcards to begin the main tournament on February 5. (See players lists and event tables in the Image Gallery below.)

The 32 players in the main tournament who prepared on February 5 for single elimination knock-out play represented the best in the world. In truth with the high level of play three cushion billiards has come to know, almost any one of the players could emerge victorious. It would take great skill, nerves, consistency and just maybe a little bit of luck as the balls rolled to win it all.

In the first round of play the big surprise was Pedro Piedrabuena of the United States. Meeting number two seed Dani Sanchez in the first round must have been daunting for the eight time US National Champion. But Pedro showed why he was a multiple US and PanAmerican Champion by stunning Sanchez 40-34 in 15 innings with a 2.666 average that knocked Dani out of the event in spite of his round-leading high run of 15. The remaining games in the first round went as many expected with Torbjorn Blomdahl posting the best game over Turkish player Turgay Orak 40-19 in 11 innings with a 3.636 average and high run of 14. There were two shoot-outs. One that saw Dick Jaspers finish first to 40 against Lufti Cenet, where Cenet was able to equalize. Then in a tense double extension Jaspers won it 4-4 followed by 2-1 to survive. In the other shout-out, Roland Forthomme also needed two extensions to best Quyet Chien Tran. With a chance to close, Tran saw his lead evaporate and thus had to equalize at 40. And once again a double extension round the first player prevailed when Tran missed in his second round (3-3 then 2-1) allowing Forthomme to move on.

In the 1/8 final round Blomdahl ended Semih Sayginer's hopes of winning in his home country as he fell 40-31 in 19 innings. Tayfun Tasdemir kept the Turkish hopes alive beating former world champion Sung-Won Choi of Korea 40-17 in 17 innings posting the high run for the round at 11. Eddie Merckx posted the best game against Korean Jung-Han Heo 40-25 in 16 for a 2.5 average. Pedro Piedrabuena and Sameh Sidhom fought a brutal match that ended 40-38 in 43 innings. Not pretty but enough to move Pedro into the quarter final round.

In the quarter finals Blomdahl exploded against Caudron with opening runs of 9 and 7, only to see Caudron in a gritty and determined comeback emerge on top 40-38 in 24, thus ending the World Champion's hopes for another World Cup win. When Eddie Merckx beat Tayfun Tasdemir the last Turk was eliminated from the event. The big match of the round was Dick Jaspers near record-breaking win against Roland Forthomme 40-13 in 8 innings posting and incredible 5.0 average and matching Blomdahl's round high run of 9. And finally Pedro Piedrabuena eliminated Dong-Koong Kang, the last Korean player, in a see-saw battle where Kang had to equalize in order to stay alive. But in spite of his early struggles Piedrabuena put together a run of 7 in the extension that befuddled Kang who missed from the spots and lost 7-0 setting the stage for the semi-finals.

The Semis brought together friends, teammates and now rivals Fredieric Caudron and Eddie Merckx. Both players were strong and an incredible battle ensued. Caudron prevailed with a round high average of 2.666 with his 40-36 win in 15 innings. The crowd could not have asked for more as Caudron had runs of 12 and 15 only to see Merckx climb back in with his own run of 14. Alas, for Merckx it was too late.  And finally the stage was set for the final match when Dick Jaspers in another tough fought game got to 40 ahead of Pedro Piedrabuena who needed 9 in the equalizer to stay alive. He got 7, his high run for the match, but was kissed out on his eighth shot and had to kiss his World Cup dreams goodbye.

And then the Finals

We don't know how many times Jaspers and Caudron have met in tournament, match and league play over the years. But the two titans had both played extremely well up to this point and so it was hard to say which if either had any advantage this time around. The match was everything billiard fans could have hoped for. The lead changed repeatedly with Jaspers jumping out first by winning the lag, while Caudron took over quickly in inning 2. Jaspers regained the lead by the break with a run of 7 to lead 23-17 after 8. But when the players returned Jaspers seemed a little cold. That gave Caudron a chance which he took with runs of 4 and 4 as Caudron went ahead once again. Then came inning 13 where Jaspers made his final surge, running 10 and getting ever so close at 37. From there safety play took over as both players knew it could end in a moment. Although Caudron made a valiant attempt to catch up, he could not string enough points together and Jaspers reached 40 with Caudron only at 34. In the equalizer Caudron needed 6, but missed his breakshot short from the spots yielding to Jaspers as champion.

With the level of play as high as it is today, three-cushion billiard fans are in for a very exciting and memorable year as the 2016 UMB World Cup in Bursa Turkey is now in the record books.

A complete list of players and all the resiuts and rankings are available on the UMB Website. More stories, pictures for all and videos for members are available on Kozoom. Gallery and site pictures of the event copyright © Kozoom.