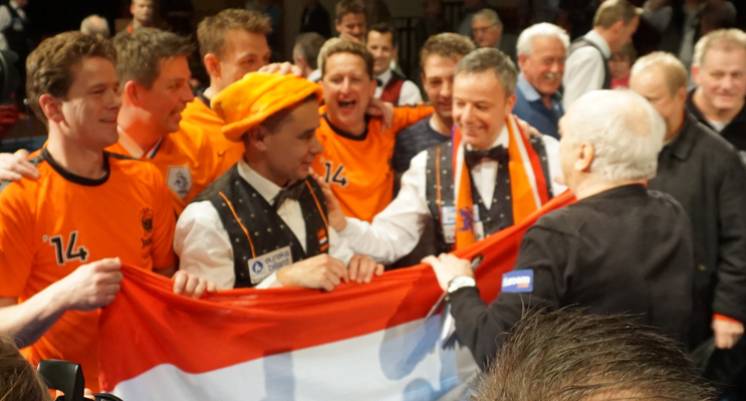 The Netherlands Dick Jaspers and Jean van Erp topped the field in Viersen Germany in the annual UMB World Three-Cushion Championship for National Teams. Twenty-four two-man teams from 21 countries participated this year, with three countries - Belgium, Germany and Turkey fielding two teams. The United States did not send a team this cycle. Our Image Gallery (below) includes a list of all the teams and players as well as pictures from the event.

The format of the tournament consisted of preliminary play with the teams competing in eight groups of three, round-robin style. In each match two teams were paired against each other, with the two games taking place at the same time. The results of the individual matches determined the winner, with tie-breakers based on averages. One winning team from each of the 8 groups moved on to the main tournament where the format was changed to single elimination knock-out. In the event that a team match was split (one team member from each won their match) there was a 15-point Scotch Doubles "shoot-out" game with all four players on the table. The Scotch Doubles format has each player from the same team alternate turns at the table until a miss.

As with every tournament at the world class level in three-cushion billiards there are always surprises that come early and often. And this year in Viersen there were no exceptions, as favorites were eliminated and unexpected players rose to the occasion. Perhaps the biggest upset on the first day was a double-whammy that led to the early round elimination of the Swedish team. Led by #1 ranked and current World Champion Torbjorn Blomdahl. the Swedes saw their hopes dashed as Blomdahl first lost to Can Capak of Turkey and later to former World Champion Ryuuji Umeda pf Japan. The nine-time former world team champions had been sent home. The best individual result on day one was a great effort by another former World Champion Jef Philipoom who posted a win against Fabrizio Cortese of Italy 40 -12 in 13 innings to average 3.076 for Belgium B. 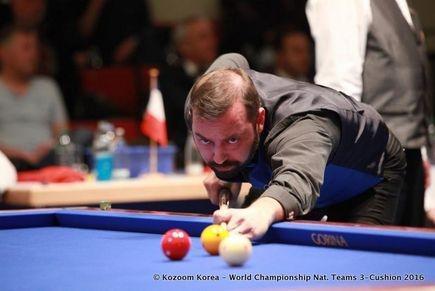 As the tournament progressed we saw the Austrian team led by the great play of reserve entrant Andres Efler move on to the main tournament eliminating the team from Spain led by 2015 World Cup winner Dani Sanchez. The Korean team, who placed second last year, did not make the final cut this time losing to Greece. In spite of having the best averages, the French team was eliminated due to their loss to Greece as well. Nikos Poluchronopoulos of Greece posted the high run for the tournament of 17 in his win over Jeremy Bury.

After preliminary rounds the eight teams entering the main tournament were:

In the quarter final round two Scotch Doubles were needed to decide the matches that were split 1-1. It was Austria over Greece in one match and Netherlands over Germany in the other. The Scotch Doubles adds to the excitement of the team competition and the crowds cheered loudly for their favorites to win. But the loudest cry of all was for the loss as the home team from Germany fell to the Netherlands who moved on. The Belgium A team continued its quest when Merckx defeated Leppens, after his countryman from Belgium B made a fast start. Caudron had no problem with Philipoom in his game advancing the four time champions. Semih Sayginer escaped with a 40-39 victory having fought not just his compatriot opponent Can Capak but his feeling sick that day. His Turkey A teammate Lufti Cenet also won against the Turkey B team opponent Hakan Incekara and the field was down to four.

On the final day it was Turkey A vs Belgium A and Netherlands vs Austria. And so the real fireworks started. The big match was Eddie Merckx against Semih Sayginer. Merckx unfortunately did not show his best as Sayginer dazzled the crowd with an amazing 40-19 win in 11 innings averaging 3.636. No doubt Sayginer is back on the world stage as the Turkish Champion has shown steady improvement in International play. His teammate Lufti Cenet also out-performed expectations with a surprise win against Frederic Caudron, and just like that the four-time Championship team from Belgium was done.

Tne team from Austria had a big hill to climb as they entered the semi-final round. No doubt Arnim Kahofer could not expect that in spite of posting a 2.0 average he would lose so badly to Jaspers 40-20 in 10 innings as Jaspers averaged a tournament high 4.0! Efler put up a valiant fight but could not force the Scotch Doubles shootout, falling short 40-37 against Jean van Erp. 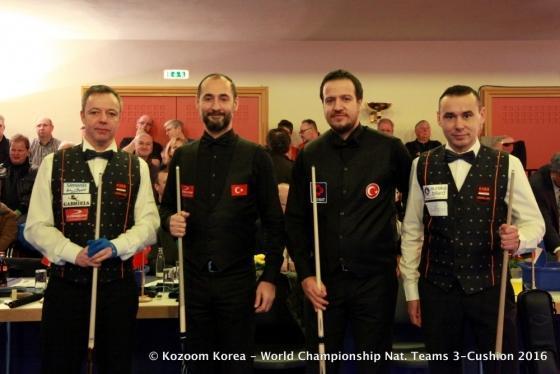 And so the stage was set for the final match. Dick Jaspers and Jean van Erp from the Netherlands versus Semih Sayginer and Lufti Cenet of Turkey. It was van Erp who defined the tone of the finals as he played a steady 2.5 average to beat Cenet 40-12 in 16 innings. Cenet just could not get his game going. It was then up to Sayginer to try and pull it out for Turkey. But in a tough defensive game it was Jaspers technique that crushed the Turkish dreams with a 40-26 win that clinched the team championship for the Dutch.

Congratulations to Dick Jaspers and Jean van Erp of the Netherlands winners of the 2016 UMB Three Cushion World Championship for National Teams.

Thanks to Kozzom for their excellent coverage, video archive and pictures (Copyright © Kozoom) of the event. Remember: Kozoom members can enjoy videos of all the great matches. If you are not yet a member, 3CushionBilliards recommends that you join. You can register by clicking here.