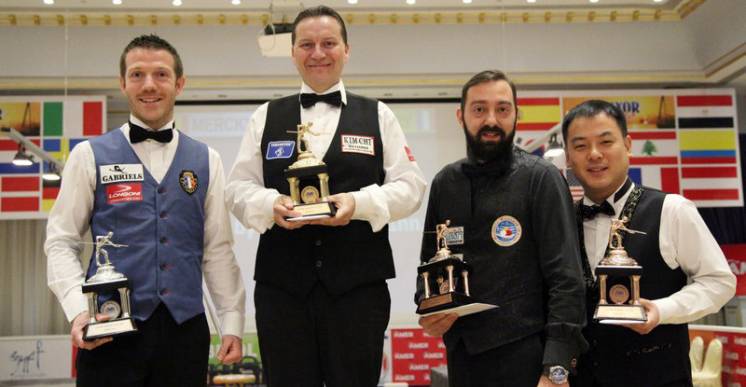 Eddy Merckx the Belgian former World Champion and 5-time World Cup winner made it number six in the 2016 UMB World Cup in Luxor Eqypt. With relentless consistency throughout the tournament Merckx defeated opponent after opponent finally dispatching Jeremy Bury of France in the final match.

And then the real fireworks began. In the very first round of the main event top players began to fall. Number 1 Torbjorn Blomdahl lost to Lufti Cenet. Number 2 Dani Sanchez lost to Quoc Nguyen Nguyen. Number 3 Dick Jaspers lost to Nikos Polychronopoulos. Number 7 Marco Zanetti lost to Ahment Alp. Number 8 Roland Forthomme lost to Javier Palazon. Number 9 Sameh Sidhom lost to Dong Koong Kang. And number 11 Quyet Chien Tran lost to Murat Tuzul. Seven of the top 12 eliminated in the first round! Perhaps as a prelude of things to come Eddy Merckx was the only player to finish in less than 20 innings posting the best game of the round winning against Trung Hau Do Nguyen 40-15 in 19 innings with a 2.105 average and high run of 12.

More top guns faltered in the 1/8 final second round, the biggest being Number 5 Tayfun Tasdemir losing to Jae Ho Cho and Number 6 Frederic Caudron losing to Dong Koong Kang. The US hope Pedro Piedrabuena ran into a tough Quoc Nguyen Nguyen and also was eliminated. Of the top ten in the world only Eddy Merckx remained. Best game in the round went to Nikos Poluchronopoulos who bested Jung Han Heo 40-18 in 14 innings averaging 2.857. High run for the round when to Almet Alp who defeated Murat Tuzul 40-36 with a high run of 17.

The quarter final round of 8 players was a tough defensive show with no player breaking 2.0 average and no player running more than 9. Jae Ho Cho defeated Lufti Cenet 40-24 and posted the high run of 9. Eddy Merckx ended Almet Alp's dream run 40-23. Nikos Polychronopoulos and Dong Koong Kang went to the penalty round after Kang tied it up 40-40. Poly ran 3 and Kang missed. Nikos moved on. The best game was posted by Jeremy Bury against Quoc Nguyen Nguyen 30-34 in 23 innings for a 1.7349 average.

The semi-final round pitted the two top players Number 4 Eddy Merckx and Number 10 Jae Ho Cho. The match between Nikos Polychronopoulos and Jeremy Bury would determine the other finalist in this year's Luxor event. And once again it was Eddy Merckx who showed his class and experience posting a 40-27 win in 20 innings against Jae Ho Cho. Jeremy Bury also shined in the semi-final round with a win against Polychronopoulos and the high run of 12.

In the end, Eddy Merckx of Belgium proved to be the toughest and most consistent player in this year's edition of the Luxor World Cup. His opponent in the finals Jeremy Bury of France could not match the strong effort in the semi-finals and prior rounds that helped him reach the championship match for the third time in his career. After falling behind at the break 19-22 Merckx made his sprint to the finish with a run of 8. Bury tried to come back but missed too many close shots at the end, allowing Merckx to finish the match at 40-28. In the equalizer Bury could only get two and so Merckx is crowned the UMB 2016 World Cup Luxor champion.

Click to view the complete charts and results for the 2016 UMB World Cup Luxor can be found.