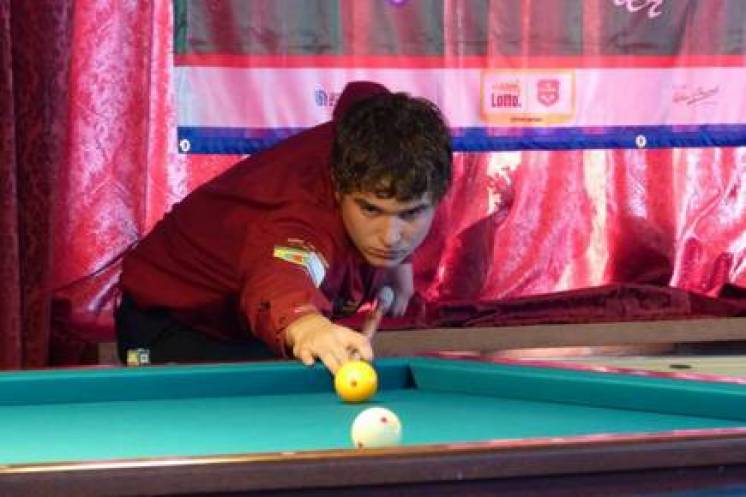 Fourteen players under 21 will show up for the European championship three cushion in the Spanish Los Alcázares, near Murcia, this week. The defending champion, the Turk Berkay Karakurt, is not among the participants because of his age. The new champion must come from three groups playing for a place in the quarter finals. (Pictured above two time Dutch Champion Joey de Kok)

The Frenchman Thibaut Espada is one of the major contenders in this championship. The 20-year-old French champion, who lives in Andernos, was in the shadow of Adrien Tachoire and Gwendal Marechal in recent years, but can gain more international experience in Murcia after his third place at the European championship under 17 in 2012. "The preparation was very good with special training from Jérémy Bury, our federation coach'', Espada explains. He took the French title by a victory in the final against Jean Haby (30-13 in 24 innings).

The Turk Arda Güngor took the European title in three cushion under 17 last year in Brandenburg and plays the championship under 21 now. The Spaniard Daniel Peña was beaten by Güngor in the final 25-20 in 20 innings.

Carlos Anguita (19) proved to be in a great form this weekend by winning a tournament in Murcia. In the final match he defeated David Martinez. The tournament had a strong line-up with among others David Zapata, who finished fifth. Also among the participants. Jose Maria Quetglas, ended in the middle.

Andrés Carrión (20) is the current Spanish champion lives in Castalla, and is one of the talents in his country with an average of 0.950. Andres has developed considerably in the training center in Los Narenjos and plays in the national league for CB Castalla.

Daniel Peña (19) is the vice-champion of Spain. He lives in Torrent, Valencia and is known as a strong character player. His average is around 0.800. He belongs for the third year to the trainings center in Los Narejos.

Patrick Bútora from Austria and Milan Ettel from Czech Republic are two players who already gained experience on the European stage. The Czech reached the semi-finals at the European championship under 17 two weeks ago. There he was beaten in the shoot-outs by German Simon Blondeel.

The Dane Anders Henriksen (19) played the European championship free game under 21 two weeks ago and makes the switch to three cushion this weekend.

The 19-year-old Joey de Kok is the player who represents the Netherlands in Spain. He took two Dutch titles this season: one on the small table, one on the match table. At the European championship under 17 in Brandenburg, De Kok took third plays and he also played a European championship in France. The Dutch talent in three-cushion will play at higher levels next year in the Netherlands and Belgium and is trained by Jean Paul de Bruijn.

Read more including comments from the players and see the Group lineups from our friends at Kozoom - CLICK HERE.