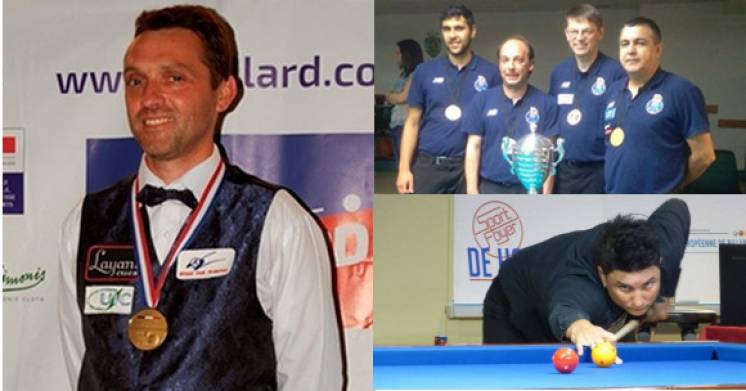 It was a busy and exciting weekend for three cushion billiards which culminated on June 20th with champions crowned in three countries. In the French championship Jerome Barbeillon (left above) took the title for the second time in four years. Team FC Porto (top) won the Portuguese championship for teams. And Dutch star Thesese Klompenhouwer (bottom) continued her winning ways taking the first ever European Cup for ladies.

European and World Champion Therese Klompenhouwer demonstrated her superior skills as she breezed to an overwhelming victory in the first European Ladies Cup held in Rosmalen, Netherlands. The 33-year old Dutch champion defeated Turkish player Gulsen Degener in the final match 30-16 in 20 innings to take the title and the 400 Euro prize.

As the favorite in the event Klompenhouwer was never in danger as she faced 16 rivals for the title. She breezed through the early rounds and had only one game that proved challenging. Her overall average of 1.171 was very satisfying as she sets her sites on upcoming the World Cup in Porto and ultimately the World Championship.

Facing his chief rival in the finals of the French Championship Jerome Barbeillon played an exceptional match to win 40-15 in 24 innings and defeat Jeremy Bury to take the title. Bury was favored going in to the final match, but had a very poor game while Barbeillon shined.

Though Barbeillon won the event with an overall average of 1.369, Bury who's play was in top form up to the end had the high average of 1.422. The high run honors went to Pierre Soumagne with ten. Barbeillon gave himself a wonderful Father's Day gift in taking the title for 2016 as he had back in Ozoir-la-Ferriere in 2012.

Led by Dani Sanchez and Torbjorn Blomdahl, FC Porto won all ten of its matches to take the Portuguese team championship. Their Portuguese players Joao Ferreira and Rui Costa only lost one match each to support the performance of their better known teammates.

Dani Sanchez, the team captain, had the best average in the tournament with an impressive (as always!) 2.000. His teammate, World Champion Torbjorn Blomdahl had the best match finishing in only twelve innings. Juan Davaid Zapata had a fantastic 15-inning match where he made the high run of 18.