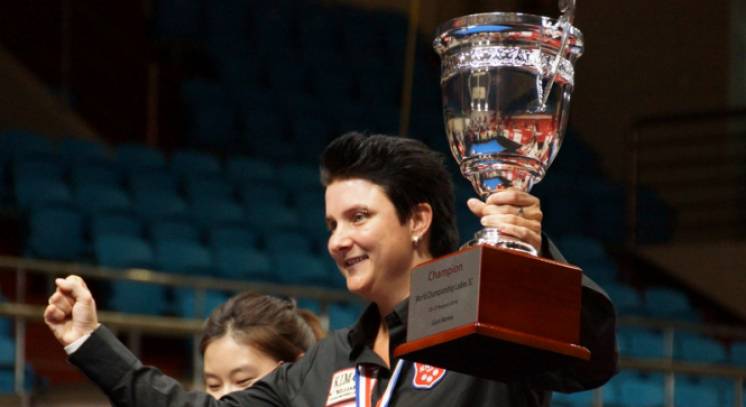 Therese Klompenhouwer of the Netherlands, the 2014 reigning world champion in Ladies 3-Cushion Billiards has won her second title at the 2016 tournament held in Guri Korea. Klompenhouwer went undefeated, winning all six of her matches and achieving a grand average of 1.122. Along the way she twice defeated 3-time former champion Orie Hida of Japan and ultimately, in the final match, young Korean player Mee Rae Lee to take the title.

The 6th World Championship Ladies 3-Cushion took place in Guri, Korea from August 25 to 27, 2016. (Day-by-day coverage with results and photos in our Image Gallery can be found below.) Attendees at the event included current World Champion Therese Klompenhouwer of the Netherlands (pictured above), 3-time former World Champion Orie Hida of Japan and US women's 3-cushion player Ester Park. The sixteen players representing 9 countries assembled for the two stage event in advance of the UMB World Cup Guri Tournament August 29 - September 4.

The qualification round divided the players into 4 groups of 4 competing in round robin format with matches to 25 points and equal innings. The top two from each group would move on to the single elimination 8 player final stage to follow. World Champion Therese Klompenhouwer and her main rival Orie Hida were the only two players coming in to the event averaging over 1.0. Nonetheless the remaining players posed a threat to the top competitors as many have demonstrated the ability to play at world class level at any time. The players from Korea were especially dangerous as they seem to be improving year after year.

Day One - The Ladies Deliver Skill and Excitement

In the qualification stage the 16 players were divided into 4 groups of 4 to play in round robin format: 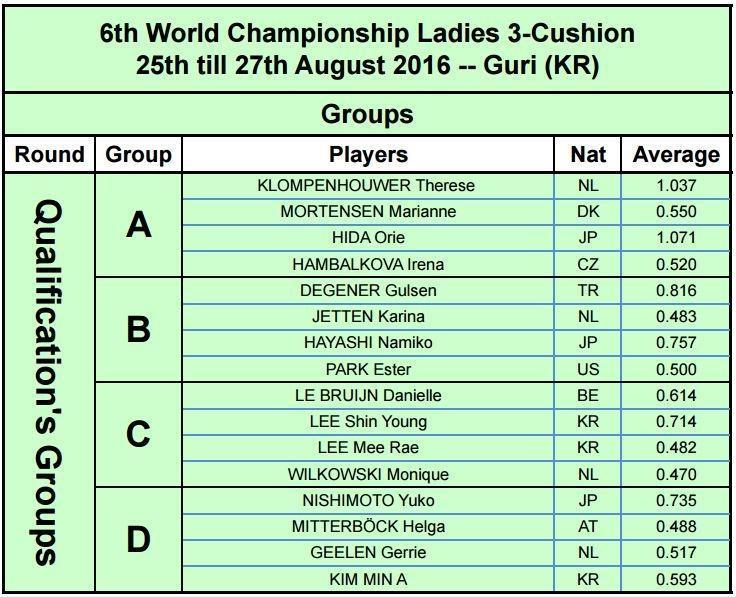 On day one in Group A Therese won both her matches including a gritty and tension-filled come-from-behind victory over Orie Hida 25-24 in 23 innings. Is that a prelude to what we may see in the finals? Both Klompenhouwer and Hida averaged  over 1.0 in their first two games. In Group B Ester Park performed perfectly winning both her games on the first day and averaging 0.793 virtually assuring that she will move on. In Group C surprising Korean entrant Mee Rae Lee upset her compatriot Shin Young Lee to lead the group with two wins, also putting her in position to move on to the quarter-finals. Mee Rae entered the event with a general average of only .482 but won her match against Shin Young 25-14 in 24 innings (1.041 average). Mee Rae may be the one to watch now and in the future! In Group D Yuko Nishimoto led with two wins compiling a first day average of 0.649.

On the second day of the Ladies 3-Cushion World Championship the 8 players from the qualification stage were official and the quarter-final knock-out round took place. As expected Therese Klompenhouwer and Orie Hida both made it through in spite of playing in the same group. Ester Park of the USA won her group and moved on along with Japan's Namiko Hayashi. Korean sensation Mee Rae Lee won her group ahead of fellow Korean Shin Young Lee. And from group D 2014 second place finisher Yuko Nishimoto was joined by Min A Kim of Korea.

The quarter-final matches moved to single elimination knock-out format, and the players who made it through were no surprise. Therese Klompenhouwer easily handled Japan's Namiko Hayashi while continuing to average over 1.0. Klompenhouwer is clearly the favorite as her play is both consistent and superior. Orie Hida struggled in 41 innings but prevailed over Shin Young Lee. Runner-up in 2014 Yuko Nishimoto set herself up for another run at the crown by dashing Ester Park's dream of making it into the semi-final round. The 2016 event was the best ever for Ester who has played in the championship tournament twice before, having faced elimination in the qualification stages. Perhaps we'll see Ester Park back again if the Ladies event finds much-needed sponsorship for 2018. The final match was a tense battle that see-sawed between the two Koreans Min A Kim and Mee Rae Lee. In the end Lee reached 30 in 35 innings continuing her unbeaten streak and setting herself up to just maybe delight her countrymen and  shock the world.

On day three the two semi-final rounds and championship matches were held. The first semi-final was a rematch of the qualification group A match between Therese Klompenhouwer and Orie Hida. Unlike their first encounter in this tournament both players were on top of their game, making for exciting play. But it was the current champion Therese who played her best game of the tournament winning the match 30-23 in 19 innings (1.578) Both players posted high runs of 7. In the remaining semi-final match 2014 runner-up Yuko Nishimoto met up-and-coming Korean star Mee Rae Lee. And once again Lee performed beautifully with her quiet style and disciplined technique posting a 30-19 win in 28 innings (1.071 average.) The stage was set... would Therese Klompenhouwer repeat... or would first-time player Mee Rae Lee - the lowest ranked player in the field at the start of the event - really shock the world?

In the final match the tension and excitement could not have been more intense. For Therese, it was her hunger to retain her crown and her ranking as the world's best. For Mee Rae it was the realization that she had made it to the finals. Surely that fact alone must have weighed heavily on her mental state and her game. And so it was that the quality of play for both players in the final game was indeed not up to the superior performance each had exhibited in earlier rounds. Nonetheless, the crowd hung on every point as the two battled for the championship.

In the first stage of the title match it was Klompenhouwer who got away early and took a 15-8 lead at the halfway point. Therese held that lead almost all the way, but faltered and went six innings without scoring at a crucial point. Mee Rae Lee, in a slow and relentless effort began to climb back in. Each of Lee's points was loudly cheered by the hometown crowd. At the penultimate moment late in the match Lee incredibly took the lead at 29-27 and had two match point chances to win. But the 30th point was first reached by Klompenhouwer and it was Mee Rae playing yellow who was forced to answer by equalizing, throwing the match into a penalty round. Echoing the men's world championship of 2015, the 2016 women's world championship title now rested on a shootout - one turn at the table for each player breaking from the spots. Klompnehouwer playing white went first and made two. And then... with her family her country and the world watching, 21-year old Mee Rae Lee stepped up to the table. Her one chance was there... but in a blink it was gone. Mee Rae was unable to overcome the tension of the moment and missed her shot on the short side. The 2016 Women's World Championship went to 33-year old Therese Klompenhouwer of the Netherlands, repeating her victory of 2014.

Mee Rae Lee later acknowledged: "I had the world title at arm's reach, and when I realized that, the tension got the better of me.'' But at 21-years of age this young star from Korea has her whole future ahead of her. This first-time experience, and her first-class performance, are a prelude to many more championship opportunities sure to come. But on this August day in 2016 the whole world is celebrating the second title win by the world's number one woman 3-cushion player. Congratulations to Therese Klompenhouwer - the 2016 Ladies 3-Cushion World Champion. 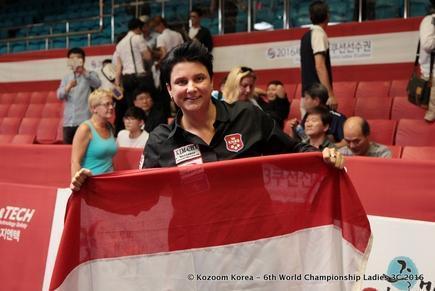 Be sure to see the charts and more pictures in our Image Gallery below. Many thanks to our contributing sources: Union Mondiale de Billard for the charts and results, Charles Brown and Kozoom for the pictures.