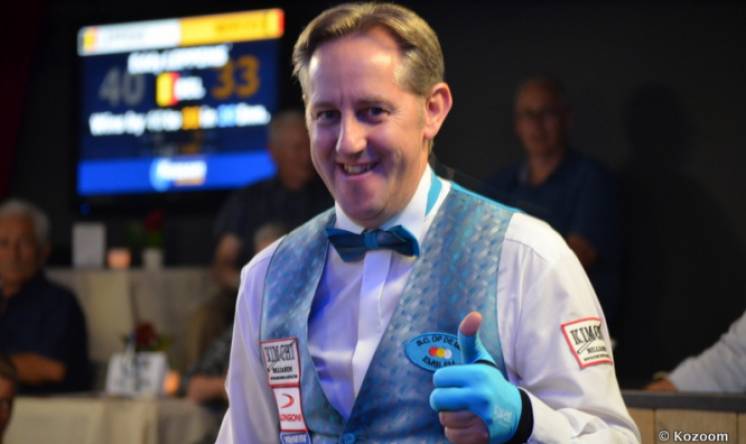 Eddy Leppens has triumphed in the 2016 Superprestige Tournament held at the Mister 100 club in Lier, Belgium. Going undefeated through both the preliminaries and the finals, Leppens showed both his skill and his poise under pressure as he mounted a comeback in the final match to defeat Eddy Merckx and take the championship.

The Superprestige Tournament, one of the most anticipated events in the Belgian 3-cushion billiard scene, took place September 12-17, 2016. Belgian's sixteen best players based on ranking were invited to play in a two-stage event. Four groups of four started with round robin play. Two from each group then moved on to an eight-man single-elimination finals. Frederic Caudron, Eddy Mercks, Eddy Leppens and Roland Forthomme were joined by twelve of their great Belgian colleagues to battle for the 2016 title.

Eddy Leppens, noted world class player is also a world class room-owner and tournament organizer. Traditionally the Superprestige event is held in his home venue in Lommel, Belgium. But with an unexpected scheduling snafu making the regular location unavailable, a temporary venue for 2016 had to be found. Enter 3-cushion billiard legend Raymond Ceulemans and his great billiard-loving family. Son Kurt Ceulemans offered the stylish Salle d'Eau room in his Mister 100 club in Lier as a temporary home for the 2016 event. Kurt has been managing the famous club that bears his father's nickname for 23 years. Though smaller than the playing arena in Lommel, the wonderful atmosphere, food and hospitality of the club more than made up for the need for a change this year.

One more important note about the event. With the cost associated with the temporary change of venue the organizers were fearful that they would have to reduce the prize money to meet expenses. But Jong-Ryul Kim, the generous owner of Kimchi Billiards the Korean mega sponsor stepped up and added their sponsorship and support to ensure the players were justly rewarded. Many thanks to that great organization.

And so the 2016 Kimchi Superprestige Tournament was underway and the much anticipated action was ready to begin. As usual, in the top levels of European billiards, even the great players with International reputations and multiple titles can be surprised. This year's Superprestige was no exception. Here is our day-by-day recap of the event and results.

Group D Was first to meet on the opening night 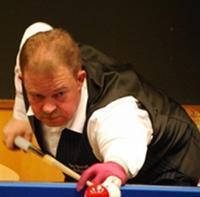 Group D played first on Monday evening. Former world champion Jeff Philipoom was the upset winner of the group with Kenny Miatton second. Roland Forthomme (ranked 13th in the world) was eliminated despite having the high overall average and the high run of 14. Forthomme dropped his matches to both Philipoom and fourth place finisher Davy Van Havere. The final results from the first evening's play:

Group A was next up with world number one Frederic Caudron 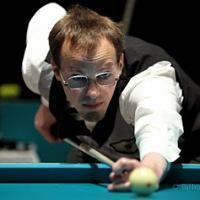 World number 1 ranked Frederic Caudron had been battling a persistent illness since before the World Cup in Guri. And so it was that his performance in Lier proved sub-par, so much so that he was eliminated in spite of his comeback wins. Having the lower average of the three players who each had two wins, Caudron's chance to repeat his victory from last year was over. Only the fourth place player, Francis Forton, could not muster a single win in the group. Steven Van Acker and Peter De Backer advanced. The final results from the second evening's play:

Group B Met to do battle on Wednesday evening 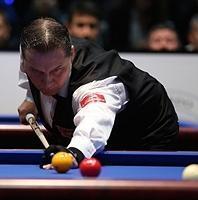 In the group that played on Wednesday, and for the first time in the event, the recognized favorite survived. World ranked number 4 Eddy Merckx put in the best performance so far with a 1.903 overall average (high run 11.) Nonetheless he suffered one loss to Kurt Ceulemans, as did Ceulemans and Ronny Brants as well. Ceulemans was placed second and qualified to move on with the higher average. Trailing was Marc Celen in the fourth spot who was shut out. The final results from the third evening's play:

Group C - the last to play for qualification on Thursday 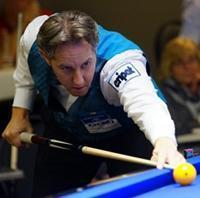 Of all the players in the qualification rounds of the 2016 Superprestige Tournament, only Eddy Leppens in the final group made it through undefeated. His 1.791 average and high run of 10 was best. In addition, his win against Marco Janssen 40-8 in 11 innings matched Roland Forthomme's best game honors (3.636) for the event so far. Some would say that signaled the winning performance that followed! Peter Ceulemans was second with one win and one tie for three match points. Ronny Daniels had but one win and Marco Janssen was fourth with his tie game with Ceulemans yielding his only match point. The final results for the fourth evening of play before the quarter-finals:

The Quarter-Finals Brought STRUGGLE Before Victory on Friday 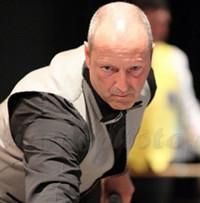 As the Superprestige tournament moved into the final stage, eight remaining Belgians readied themselves for a single elimination knock-out phase. The four matches in the quarter-final round were a combination of the expected and the dramatic. Eddy Merckx met Peter Ceulemans in the opening match and with a strong performance Merckx was never in doubt winning 40-13 in 15 inning s (2.667 average, high run 12.) On the next table the match between Steven Van Acker and Kurt Ceulemans was on the other end of the spectrum. Van Acker struck first with a run of 8 to take the lead. Kurt later fought his way back with a run of five only to be answered by Steven's run of six. Then the drama really began. With Van Acker at 39 and needing only one carom to win, he suddenly stalled, missing match ball after match ball. With the door open Ceulemans slowly, point-by-point reached first to 37, then 38, and ultimately winning the match 40-39 in 24 innings to make the semi-finals. Van Acker was out by one carom after getting so close, a disappointing finish. Merckx will face Ceulemans in the penultimate round on Saturday.

The later two quarter-final matches were no less exciting and both filled with drama and uncertainty. Eddy Leppens faced Kenny Miatton. Jef Philipoom was paired with Peter De Backer. Both Leppens and Philipoom got off to slow starts allowing their opponents to take the lead. Though behind most of the early stage, Leppens found his rhythm mid-game and first took the lead at 35-31 when he was able to clinch the win and eliminate Miatton 40-38 in 35 innings. Nothing like his earlier performance, but enough to reach the semi-finals. Philipoom in similar fashion had fallen behind early. Although the gap was not large, De Backer was able to maintain his lead almost to the end. That is until Philipoom with grit and determination fought his way to the top in the very last stage of the match by only a single carom to take the win 40-39 in 43 innings. Another single carom victory. For world class players to fall below 1.0 in a late stage match is more a reflection of the defensive nature of the play, and the evenly matched levels of the players. Philipoom moves on to face Leppens in the semi-finals.

The semi-final and the finals on the Last Day

The semi-final rounds presented no surprises and no problems for the two best players remaining in the Superprestige in Lier. Eddy Merckx dispatched Kurt Ceulemans in a one-sided affair 40-21 in 20 innings. At 2.000 Eddy continues to show his consistency and skill. Kurt could only run a high of 4 and could not match his win against Merckx in the preliminary rounds. Eddy Leppens also had no problems from Jef Philipoon in his 40-28 performance also in 20 innings. Eddy's run of 10 was the best in the round. We should note that Jef Philipoom had surgery only three weeks earlier. Many thought he would not be able to play in the event. That he made it all the way to the semi-finals is a testament to his skill, fighting spirit and love of the game. We wish him continued recovery and great play in the future, 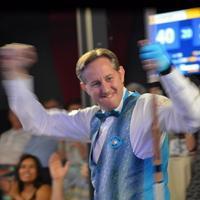 In the final match, Eddy Leppens faced his friend and rival Eddy Merckx. The two are well-known to each other and had met many times before. Up to this point both had shown their capability to win... it was simply a matter of who would get the advantage and hold it. Early in the match Leppens took the lead and was ahead 18-8 when Merckx unleashed a burst of four followed by the match high run of 13 to take the lead 25-18. Leppens was down but certainly not out. A few innings later Leppens finally answered with his best run of the game - a 10 - to regain the lead. Once Leppens jumped ahead at that late stage Merckx struggled but could not come up with a new scoring run. With the final carom it was Eddy Leppens who took the crown in the 2016 Superprestige Tournament. The final score -- 40-33 in 20 innings (2.000 average.) Eddy and his family celebrated his joyous victory, thanked the Kim and Ceulemans families for making the event possible, and looked ahead to next year where he hopes to repeat when the event returns to his home venue in Lommel. Congratulations to Eddy Leppens the 2016 Kimchi Superprestige Tournament Champion.

Selected games from the event are also available for viewing for Premium Pass members at Kozoom.com. Thanks to Kozoom for results, video replays and pictures. 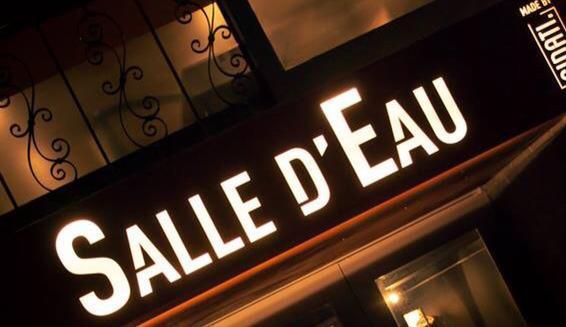