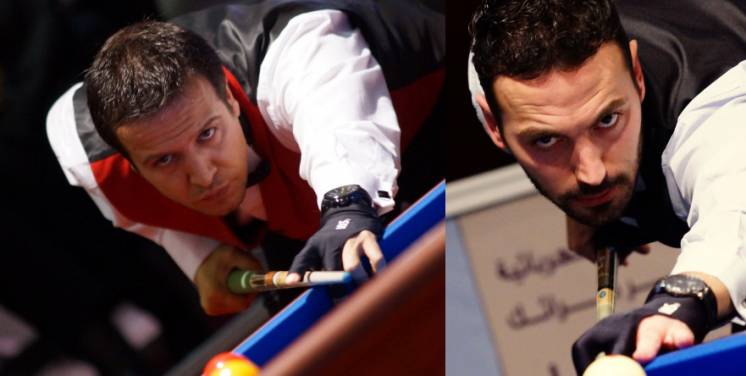 In international play this past week Lufti Cenet (above left) won a Grand Prix event in Turkey, while Filippos Kasidokostas (above right) won a national tournament held in Greece. For Cenet, it was his third Turkish tournament win this year. For Kasidokostas it was a welcome sign that he may have finally overcome arm problems he has been battling for the past year.

Lufti Cenet shined as the best among his Turkish compatriots in the Grand Prix event held in Diyarbakir, Turkey. In taking his third tournament victory of the year Cenet defeated Ahmet Alp in the final match.

Beginning with a group of 168 players, the field had been whittled down to the top eight who competed in the knock-out final rounds. Notably Tayfun Tasdemir was eliminated by Birol Uymaz in the quarter-finals. Then, in the semi-finals Uymaz fell to the ultimate winner of the event Lufti Cenet. Ahmet Alp, the tournament runner-up, won a tough victory over Can Capak in his semi-final match. At the end of regulation the score was tied 40-40 tie and so victory was determined by a shoot-out won by Alp. In the final match Cenet prevailed with a final score of 40-33 in 24 innings defeating Alp and taking the title.

Lufti Cenet earned 2000 euros for his winning effort. With three tournament victories so far this year, Cenet is looking forward to the World Cup that begins in La Baule, France on October 24.

Earlier this year Filippos Kasidokostas was forced to withdraw from the World Cup tournament in Luxor, Egypt with an injury to his right arm. With vibration in his stroking arm caused by problems with the nerves and muscles, his future at the top of international billiards came into question. Now with a victory in a national tournament in Greece we are hopeful that he is on the road to full recovery and will once again take his place on the world's 3-cushion stage.

Although his tournament performance was not up to his World Championship level, with 200 caroms in 145 innings (1.379 average), Filippos was best overall. Going undefeated in 5 matches in the 32-man round robin event, his high run of 11 was also tops among all competitors. Kostas Papakonstantinou was second with a 1.38 average and high run of 9 in the tournament held in Athens, Greece.