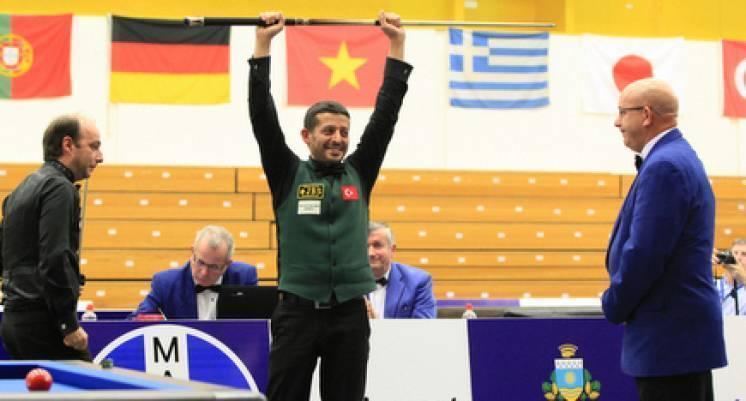 Murat Naci Coklu of Turkey has won his second world cup, the 6th installment for 2016 in La Baule France. It was almost one year to the day that Coklu took his first WC title in front of his hometown crowd in Istanbul, October 2015. The fans in France were no less appreciative of his fine play as they cheered his victory over Dani Sanchez in the final match in La Baule.

Coklu had a rough start in the event with an opening loss in the qualification stage to Korean Ji Hun Ahn 40-35 in 23 innings (1.521 average.) After a win against Myung Woo Cho, the group winner, (40-20 in 20 innings, 2.000 average) Coklu was only placed second. But in the qualification stage, the twelve first place group winners are joined by three of the second place finishers to move on to the main event. And of the three second place qualifiers, Coklu was the very last, just barely making the big event as the 15th entrant.

In the opening round of the main event Coklu began his steady rise to the top as he won his first game, and set the stage for his steady improvement to follow. In the 1/16th round he faced Korean Champion Haeng Jik Kim, winning 40-32 in 19 innings for a 2.105 average and his personal tournament high run of 9. The 1/8th round saw Coklu eliminate Javer Teran of Ecuador 40-26 again in 19 innings. Teran was one of five wildcard entrants coming from the Pan American federation. The wildcard players are seeded into the main tournament along with the top twelve in the world.

The quarter-final round pitted Coklu against the remaining Frenchman Jerome Barbeillon, whom the crowd was pulling for mightily. The pre-event home country favorite Jeremy Bury had fallen to Italian Marco Zanetti in the opening round. If France was to have a favorite son atop the podium it would have to be Barbeillon. Barbeillon was another wildcard seed that Coklu faced. Though Barbeillon played well to that point, Coklu stepped up his game another notch taking the match 40-30 in 17 innings with a high run of 8 and his event best average of 2.352. 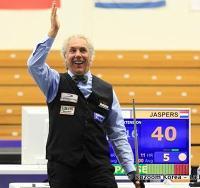 In the semi-final round Coklu faced Marco Zanetti who was playing fantastic and had come off a huge win against Dick Jaspers. Both players reached 40 in 16 innings (2.500!) but Zanetti won the shootout with an opening run from the spots of 8 to Jaspers 4. Zanetti seemed ready to go all the way. But Coklu stymied the Italian master with tough positions in a 40-22 match in 25 innings. Zanetti could only manage a best run of three in averaging 0.880 to exit the tournament. In the other semi-final game Dani Sanchez just edged Torbjorn Blomdahl 40-38 in 31 innings to set up the final match.

And so it was Dani Sanchez of Spain versus Murat Naci Coklu of Turkey for the 2016 UMB La Baule World Cup crown. And once again, whether it was Coklu's defensive strategy or merely the whimsical nature of the game, Sanchez experienced the same frustration that Zanetti felt in the prior round. Coklu played his usual steady game mixing brilliant shots and tough defensive leaves, as he took the title with a final score of 40-20 in 21 innings (1.904.) Sanchez was the second top 12 world player to finish a game against Coklu under a 1.000 average at 0.952.

When Coklu won his first world cup in October 2015 he jumped from 34 in the UMB rankings to 15. With his win in La Baule in 2016 he moves to number 9 and achieves a spot in the coveted world's top 12 where he will be seeded directly into the main events at future World Cup tournaments. Congratulations to Murat Naci Coklu, tops in the world in La Baule France in 2016.