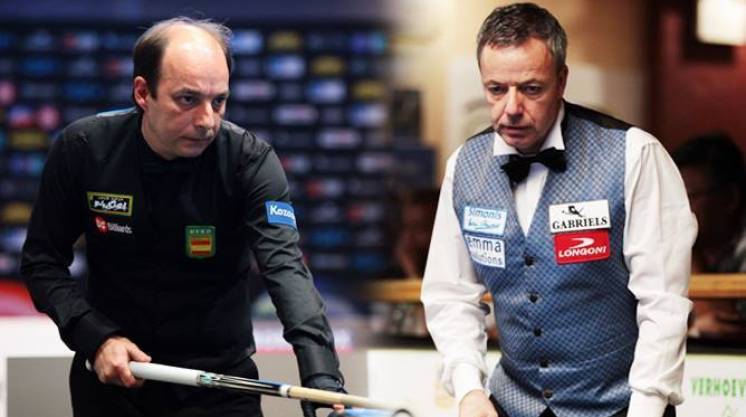 What a glorious time in the life of Dani Sanchez (above left). In 2016 he won the World Championship title for the fourth time. That qualified him to face the great Dick Jaspers (above right) who was the 2016 overall World Cup winner. The two met on Saturday March 4 in Antwerp Belgium to compete in the prestigious Supercup founded by Ludo Dielis. The unique match format - best 4 of 7 in a race to a short 7 points - was exciting and dramatic. In the end Sanchez was the victor and enjoyed an immediate second honor as he was named 2016 Player of the Year.

The Supercup event - a combination of sport and entertainment - was held in the beautiful Antwerp Hilton in Antwerp Belgium. This 13th installment has an honors list of previous winners that included 3 previous wins by Sanchez and 2 by Jaspers. With a 5,000 Euro prize on the line the two paired off in a lightning fast battle that included explosive offense and clever defense. Sanchez with both skill and a little luck jumped out to a 3-0 lead in the match, winning the first three games by scores of 7-5, 7-5 and  7-0. After losing the third game, and failing to score, it seemed that Jaspers chances were over. But the former World Champion fought back, and in an incredible comeback won the next three games 7-1, 7-2 and 7-2. This set the stage for one of the most dramatic finishes in Supercup history.

In the final game the match see-sawed, with each player having an opportunity to close out for the win. However, with misses ever so close the drama and tension built and could be felt throughout the hall. At the last Jaspers just missed his out-shot giving Sanchez one more opportunity, where he reached the seventh point. In this very special format, with the match tied 3-3, the second player Jaspers playing yellow had one chance to equalize. With calm confidence he stepped up and suddenly the score was 7-7 and for only the second time in the history of the Supercup the championship would be settled in a shoot-out.

Sanchez began by making three from the break. Jaspers also made three, then missed. So the players prepared for a second penalty round. The Spaniard scored twice in his second turn and again Jaspers could only make two from the spots. The crowd was really getting their money's worth as the two warriors readied for what would be the third and final attempt to close out the match. In a thrilling finish at the end, Sanchez's two points were enough for victory, as Jaspers missed his second shot playing with his left arm. The title and first prize of 5.000 euros and a diamond pin went to Dani. 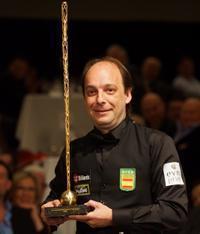 Later when asked why he was unable to close out the match early on when he had a 3-0, Sanchez honored his opponent with a simple answer: "I was playing the one of the best players in the world."

Immediately following the event the announcement was made as to who was voted 2016 Player of the Year. The voting came in from the federations and the 50 top players in the UMB rankings. The final vote would be decided among the top threee players -- Dani Sanchez, Dick Jaspers and Frederic Caudron. By an ever so close margin of 165 to 141 points Dani Sanchez edged out Frederic Caudron, with Dick Jaspers to follow at 133. The Player of the Year is awarded 5,000 Euros and a chance to claim a trophy which is encrusted with 600 diamonds and is valued at 50,000 Euros. To claim the trophy the player must be named Player of the Year three times in five years.

Congratulations to 2016 World Champion Dani Sanchez, winner of the Supercup and 2016 Player of the Year.