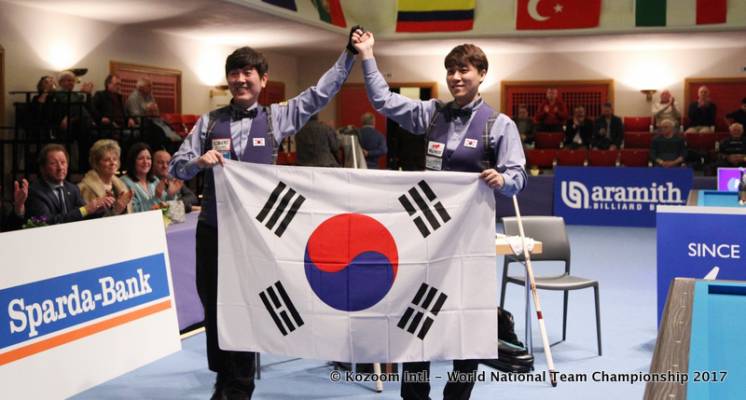 Two star players representing Korea were all smiles as they stood on the podium during the honor ceremony of the world championships for national teams in Viersen, Germany March 12, 2017. The 39-year old Sung-Won Choi (above right) and 44-year old Jae-Guen Kim (above left) won the first world team gold for a Korean national two-some. Their victory over Frederic Caudron and Roland Forthomme of Belgium in the final (40-34 in 24 innings) was broadcast live in their home country, with more than 1.2 million people watching. The new champions were overcome with joy and emotion in the aftermath of their great victory. 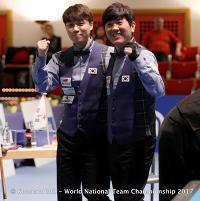 For Sung-Won Choi, this was his second world title, after his win in the individual event in 2014. The win over the Belgians was created in the later stages of the match. A first attack by Choi and Kim came in the fifth inning, with a run of 9. The match then went neck and neck for quite a while, with scores like 21-21 and 25-25. Then the Koreans ran a 4 and a 6, to create the gap. Frédéric Caudron: "We have failed to cash in on a few chances, and the Koreans are strong enough to punish that.'' Roland Forthomme: "I have never felt at ease in this match. The positions I left for Caudron were often very difficult, and it made it hard for us to make a high run.''

The Belgians, who were able throughout the tournament to find an extra gear, could not do that in the final. Sung-Won Choi: "We stayed cool in the final stages, in spite of the pressure.'' The final Korean point, followed by Forthomme's miss in the equalizing inning, brought on an ecstatic joy to the winners. The two Koreans embraced, softly sang along with their national anthem and then shook hands with the satisfaction of knowing they had achieved their dream.

The podium was completed by the players from the Netherlands (Dick Jaspers and Jean Van Erp lost to Belgium in the semi) and the French (Jerome Barbeillon and Cédric Melnytschenko who played a strong event, but lost to eventual winner Korea). The tournament, for the first time in Scotch Double format from the first day, had a hesitant start with some skepticism felt in the stands. On day two, as the stronger countries entered the arena, the averages and runs rose along with the tension. 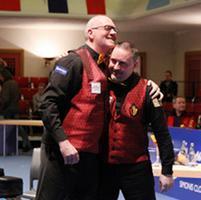 The highlight on the way to the finals, undoubtedly, was the Belgian run of 20 in the semi against Germany A. The Dutch made the best impression in the group stage with 2.051, ahead of Turkey with 1.739, Sweden with 1.666, Germany A and Belgium with 1.509. The teams from Colombia and the Czech republic missed out on the quarterfinals, in spite of their excellent averages of 1.702 and 1.604.

Read more of the story from our friends at Kozoom: World gold for Korean star players in Viersen 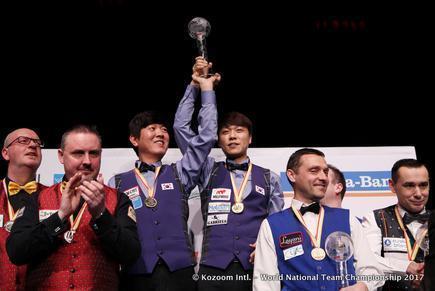