Three cushion billiards may be the most popular of the carom games here at 3CushionBilliards.com but it is only one of many challenging disciplines that will be on display as the 2017 European Championships recently completed in Brandenburg, Germany. The sport of carom billiards continues to remain popular in the European countries as witnessed by the many junior players who have come to test their skills alongside some of the world's must illustrious stars.

The list of players for the European championships in all disciplines, which was played in the Stahlpalast in Brandenburg an der Havel from April 28 to May 7, is now official. The tournament opened with the main discipline, three cushion, where Torbjörn Blomdahl was set to defend his European title from April 28th to 30th. The Dutch team of Dick Jaspers and Raimond Burgman was the title holder in three cushion for national teams. The ladies won't participate in the European championship this year,

CEB sports director Jean-Pierre Guiraud, who has a tough job to managing the mega-event, also published the schedules for the juniors. The juniors under 21 in three cushion play their tournament together with the seniors from April 28-30.

Here are some quick facts about this incredible event:

Here were the disciplines in order of appearance: 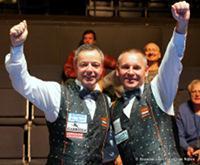 All matches were broadcast live on kozoom.com and are available for replay to permium members. Special thanks to Kozoom for the story and pictures.