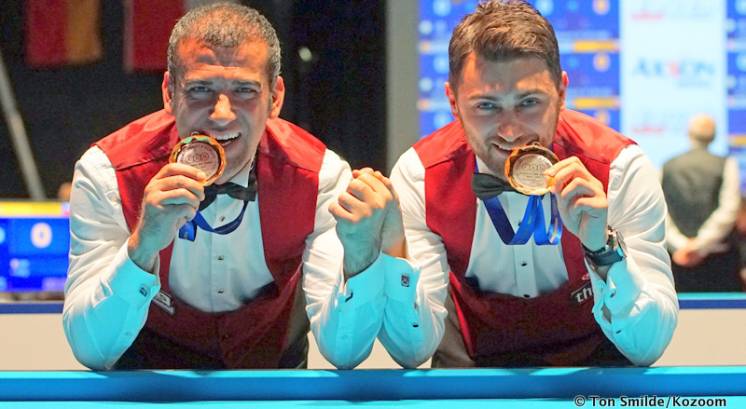 The two Turkish players, Tayfun Tasdemir and Can Capak, hugged each other with joy in the arena of the European championship after their victory in the final match over the dethroned champions Dick Jaspers and Raimond Burgman of The Netherlands. The newly crowned European champion in three cushion for national teams is Turkey, after a spectacular finish for which the crowd rewarded their victory with a standing ovation. For Tasdemir, it was his second European title, for Capak his first major international success.

The final match reflected the superior performance of the two Turks who were never in trouble, unlike in their hair-raising win against Greece in the semi-final round where they had to mount an enormous comeback. The final score of the title match was 40-19 in 14 innings to clinch the gold. The real story was how Tasdemir and Capak got their chance to reach the final round. In the penultimate semi-final match against Nicholas Polychronopoulos and Kostas Kokkoris of Greece the Turkish team got off to a slow start when all looked hopeless as they trailed 30-9 after 15 innings. Then suddenly everything turned their way. The Turks began a scoring onslaught while their opponents faltered, missing shot after shot. First they put up 11 unanswered points (with a run of 9 in there) to close the gap to 30-20. Then only innings later it was 32-29 and they knew they were back in the hunt!. By the 20th inning the Turkish whirlwinds had taken the lead at 35-33. Two innings later the match was theirs - 40-33 in 22 innings. The final surge from the Turkish teammates amounted to 31 points in 7 innings, a remarkable 4.43 average for the second half of the match.

The Dutch team entered the finals after defeating Denmark with a one-sided match that began with a tremendous surge yielding a 25-1 lead after 6 innings. The final score of 40-23 in 24 innings showed the heart of the Danes to fight back but it was too little too late. Jaspers and Burgman had already two European Team Championship gold medals and were hoping for the hat-trick. But their hopes were ended by the Turkish team. Nonetheless the two were proud of their play in achieving the silver medal.

With the exemplary play in the finals the Turkish team achieved their well-deserved victory, with both the best average for the event as well as the high run. Here is the final ranking showing the average and highest run for each of the teams:

The ranking of the 2017 European championship determines the qualifiers who will play in the World championship for national teams to be held next year in Viersen, Germany. For the first time only 16 teams will play in that event, a smaller group than in the past.

A final word on the format of the team championship - Scotch Doubles - which is especially challenging. Each player gets only one shot at a time at the table. Make your billiard and your teammate shoots the next shot. Miss your billiard and a member of your opponent's team steps up to shoot. Unlike a singles match where a player can get a rhythm going to produce repeated high runs, the Scotch Doubles format can serve to interrupt the natural flow and make scoring multiple times in row more difficult for the players.In addition, the playing style of each individual can influence the outcome. The player who scores may play for a different follow-up positions than his teammate would, leaving a less desirable position for that teammate to face at the table. Each team had a little different approach to meeting this challenge. Some collaborated at the table advising each other on how to play a particular shot. Others simply allowed each team member to make their own shot decisions. In the end the style of the great Turkish team coupled with the their brave and consistent play against all obstacles prevailed to reward them with the title,

Congratulations to Tayfun Tasdemir and Can Capak 2017 European Team Champions in 3-Cushion Billiards. 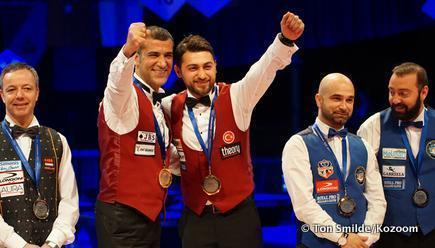