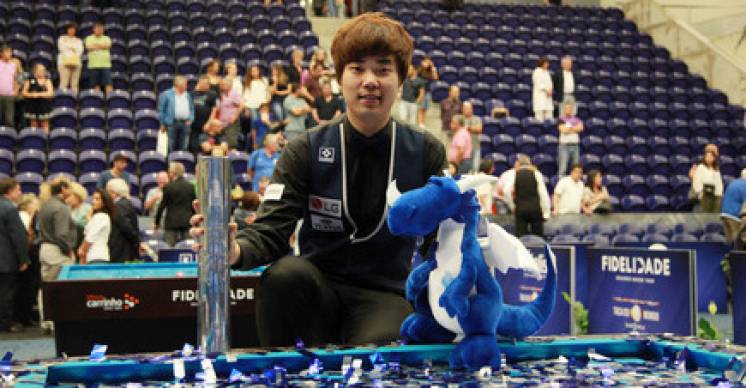 Haeng-Jik Kim, Korea's four-time world junior champion, at age 25 has won his first World Cup in Porto, Portugal. In the FC Porto arena, the best of all the "Kim's" was never in trouble throughout the main event. In a stunning turn, nine of the world's top-10 players were eliminated in the knock-out rounds leading up to the final match. And in that final match, Haeng-Jik Kim got the better of Vietnam's Nguyen Quoc Nguyen finishing 40-34 in 23 innings to take the crown.

With a full inscription and a large contingent from the Asian federation, the 2017 UMB World Cup held in Porto, Portugal July 3-9 was destined to be a historic one. No one could predict how the main event would go, but for years the Korean and Vietnamese players had been steadily gaining ground on their European counterparts. In the end, 2017 Porto may be remembered as the breakthrough event.

The four days of qualification rounds saw two players from the second day entries make it all the way to the main event. 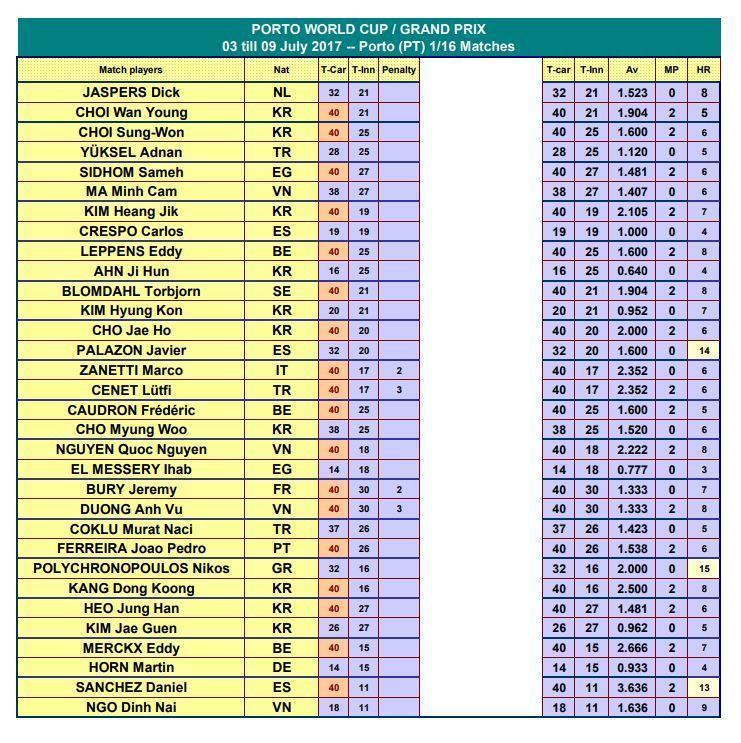 In our re-cap above the players highlighted in red and green made it through to the main event. Incredibly, it was the tournament winner Haeng-Jik Kim who would meet both of the Day Two challengers - and defeat both Carlos Crespo (Spain) and Wan Young Choi (Korea) - in the knock-out phase.

The best game of the event was played on the fourth day in the qualification round. Eddy Leppens of Belgium played a tremendous game against Xuan Cuong Ma of Vietnam, going 40-11 in 7 innings with runs of 14 and 11. His 5.714 average earned best game honors. Perhaps the big surprise in Porto was the early elimination of the top-5 world ranked players. Dick Jaspers and Marco Zanetti went out as early as the first round, against the sensation Wan-Young Choi and semi-finalist Lütfi Cenet.

Frédéric Caudron lost in the second round, against ultimate runner-up Nguyen Quoc Nguyen, who was unstoppable and made the highest run of the tournament (17) in that match. Eddy Merckx missed three match points against Dani Sánchez, to lose 40-39. The Spaniard, in turn, did not survive the quarterfinal against the other semi-finalist Jung-Han Heo, who edged him 40-38. Torbjörn Blomdahl was outplayed by Lütfi Cenet (40-24).

Thanks to Kozoom for pictures, stats and video replay (available to members.) Thanks to UMB for main event charts. Enjoy the photo gallery below.