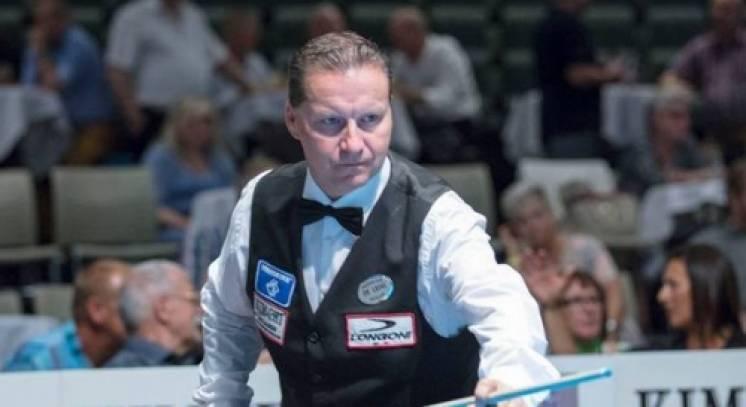 Eddy Merckx has won the 2017 Kimchi Superprestige Tournament in Lommel Belgium, held August 28 thru September 2. With a steady, often creative and sometimes gritty performance, Merckx takes the first trophy of the Belgian billiard season - and an important one at that!

The 2017 Kimchi Superprestige Tournament held in Lommel, Belgium is an event limited to Belgian players. So of course some of the top players in the world come to compete in the opening event of the new Belgian billiard season. Eddy Merckx, Roland Forthomme, Frederic Caudron and Eddy Leppens were joined by 12 other top level players for the event. With such a strong field you can never be sure how the games will turn out.

The road was not easy for Merckx on the way to the title. After a rather sub-par performance in the Verhoeven Open in New York, where he played well below his average, he had to steady his nerves, his game and his focus to rise to the challenge. In the most important match, Merckx triumphed over Roland Forthomme in the final with a 40-33 in 19 performance. To reach the single elimination stage he demonstrated a strong showing in the group stage. But he proved toughest and unbeatable in the knock-out matches, including having to dig deep to fend off a tough challenge from Steven van Acker. In the semi-final round, he dealt handily with Peter Ceulemans (40-29), and of course in the final he out-raced Roland Forthomme.

Roland Forthomme showed his class and skill by preventing Caudron from winning his tenth Superprestige. In what was a very defensive match, each player missed 13 times 23 innings. In fact, the great Caudron had a club player level start making just 1 point in the first 9 innings. In the end it was top play by Forthomme who made two runs of nine and ended the match 40-33. Even in the final game Forthomme showed his skill and class with a run of 10 to take a 25-18 lead midway. But Merckx stayed steady and with sharp play scored heavily in the second half to take the crown. Here is the final ranking of the event with the top eight players who made it to the final stage:

With his win, Eddy Merckx adds another title to the 2017 Ho Chi Minh World Cup title he won in May.

Kudos from all go out to Eddy Leppens and his team of volunteers, for their flawless organization. Thanks to Kozoom for results and re-cap. Picture above courtesy of Acx Dirk/Billardsphoto.com

And of course our congratulations to Eddy Merkx the 2017 Kimchi Superprestige champion.