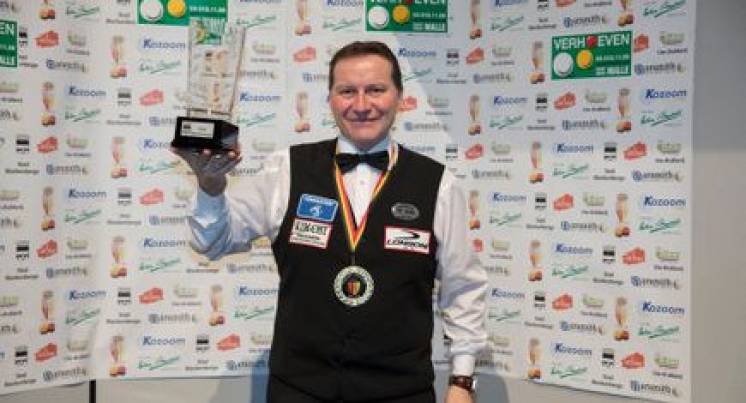 Edddy Merckx is the new 3-cushion champion in Belgiian, defeating the great Frédéric Caudron in a superior final. Their clash was the perfect climax of a week of the Belgian Nationals in (almost) all disciplines.The crowd in Blankenberge casino had high hopes for the match between the world's number 1 & 2. But it was mostly one-sided as Merckx was the clearly better player on this day as he easily won his ninth Belgian title.

Caudron ended the week without a title, which is a first for the Belgian super-star! That never happened to him since he made his debut at the Belgian nationals many years ago. In the past, the Multi's were Caudron's stage on which he starred in all disciplines, sometimes winning three or four titles in the week. At this edition of Blankenberge, he not only lost his 3-cushion title, but also the 1-cushion crown. Eddy Leppens drew with Maarten Janssen on the final day (150-150 in 19, in a true nail biter of a match), and that was just enough to stay ahead of Caudron, whom Leppens had beaten head-to-head.

Merckx seized the opportunity on what was clearly not Caudron's best showing to secure his win. Now Eddy has high hopes for an eventful year as he sits just off the top of the UMB rankings in the number two spot. Perhaps his win against the number 1 player Caudron in the championship match is a sign of things to come for Eddy.

Read more about Eddy's great effort from our friends at Kozoom.