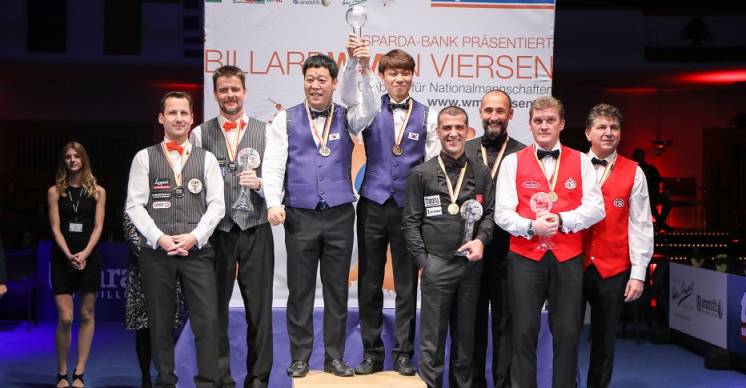 The team from South Korea has for the second year in a row won the World Team Championship held in Viersen Germany February 22-25. With sharp play by former individual world champion Sung Won Choi (who was also on the 2017 winning team) the Koreans won their final match over the surprise Austrian team who took silver. Bronze honors went jointly to Turkey and Denmark.

Partnering with Dong Koong Kang, Choi led the 2018 Korean team to a convincing 40-30 win in 23 innings against Andreas Efler and Arnim Kahofer in the final match. The 2017 team consisted of Sung Won Choi and Jae Guen Kim. The question now is: Who will Choi show up with next year to vie against the Europeans for a three-peat?

The Festhalle in Viersen, Germany hasn't often seen an event with so many surprises. Strong contenders like Greece and Vietnam were disappointing, and favorite countries were eliminated, especially in the quarterfinals and semifinals. Host country Germany (Horn and Lindemann) missed top form and lost to the experienced Turks (Sayginer and Tasdemir). The Netherlands (Jaspers and de Bruijn) were beaten by the Danes (Carlsen and Andersen). Belgium (Caudron and Philipoom), always a title candidate, was surprised by the revelation of Viersen: the Austrians (Efler and Kahofer). Last year's semifinalist France was beaten by the Korean team.

The exciting quarterfinals resulted in two confrontations between a favorite and an underdog: Korea took on Denmark and Turkey faced Austria.

Sayginer and Tasdemir had the much better start against Austria, but the second half of the match was tense. Efler and Kahofer felt they could play freely, the pressure was on the Turks. It was Austria that squeezed out the final points: 40 - 38 in 35 innings.

If possible, the second semifinal was even more of a nail biter. Korea could not shake off the Danes, and even the 40 - 37 they put on the scoreboard was not enough: Denmark equalized with a run of 3. An extension of 15 points had to be played, and this proved to be too much for Carlsen and Andersen. The batteries were empty, Korea won the extension 15 - 2 and booked their place in the final.

Efler and Kahofer played a fearless final, and they even had a 6 point lead. The second half of the match was dominated by Korea, and Austria, like Denmark, simply ran out of steam. Even after the 40 - 30 final result, the Austrians can be proud of the tournament they played. But Korea was the best team, and the deserving winner of Viersen 2018. That German city, as UMB president Farouk Barki announced during the opening ceremony, will host this event for at least another five years.

The Dutch duo put a new record in the books: in their match against Egypt, they scored the 40 points in 11 innings (3.636), a new world record in the Scotch Double format.

The Korean team also improved a world record: their general average of 1.920 is the best ever in Scotch Double.

The high run in Viersen was made by Austria: 14.

Thanks to Kozoom and UMB for pictures and re-cap of the even. Read more at the UMB