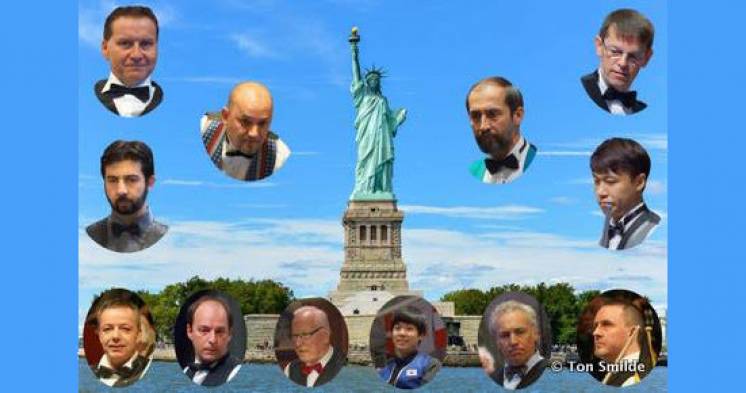 The six best players in the world and six wild card players are set to face off in the world's most lucrative three cushion tournament ever. Twelve top players in three cushion will meet each other in New York August 5-11, 2018 to battle it out for a total of $608,000 in prize money. The winner will receive $150,000 - the single largest payout ever to a winner of a 3-cushion billiards event. The name of the tournament is The McCreery 3C Champion of Champions. The location is in New York (at a private estate of the tournament's billionaire benefactor.) The organization is in the hands of UMB in cooperation with the organizers. Broadcast will be provided by Kozoom.

The six seeded players, who who meet each other in a full competition beginning with the preliminary Round Robin followed by semi-final and final round are:

The complete competition between the twelve players will be played in matches to 40 on three match tables under the brand Rok Billiards. The four best players then meet in the semi-finals and the final to 50 points without an equalizing inning.

Mr. Farouk Barki, UMB president: "In the last meeting in New York, from 20 to 22 January, we finalized the tournament. It will be a UMB event, but the organizers have done all the preparations for two years. We thank them for their common passion for our sport. This great tournament will be a promotional event for our sport in which new cameras and a new production system will be introduced. There is chosen for the name "Champion of Champions," because ten players have been world champions one or more times. Haeng-Jik Kim four times as a junior. The two American players have been champions in the confederation for the last two years. I hope, as the UMB chairman, that it will be a huge success and that the tournament will return on the calendar in the coming years.''

The event is called an invitation tournament as the organizer determines which twelve players are invited. There are no ranking points to win for the UMB rankings. The field has been carefully chosen: Caudron, Merckx, Jaspers, Zanetti, Kim and Blomdahl are the first six players in the world ranking. Raymond Ceulemans is the eternal legend of three cushion, winner of 23 world titles in three cushion and 23 European titles. Dani Sánchez is the four times world champion, Sung-Won Choi the only Korean world champion, Semih Sayginer the Turkish prince of billiards, Pedro Piedrabuena and Hugo Patino the best players from the Americas with both US and Pan-American Championships.

The prize money has never been seen before in 3-cushion billiards. The winner will be rewarded by the biggest prize ($150,000) that he or any player has ever won. Compare this incredible event to other, well-paid sports, such as cycling and darts:

What a year we are about to have! The UMB (World Federation of Billiards) has already launched huge plans for better payouts in its World Cups, and has scheduled new tournaments on the calendar including the Continental Cup, the Masters tournaments for top players and now the New York McCreery 3C Champion of Champions. It turns out the biggest payout is also the first big event to arrive.

The tournament is named after Wayman C. McCreery (1851-1901) pictured at left, a respected taxman from Saint Louis, Missouri, USA. McCreery was not only a great sportsman, but also is recognized as the man who invented three cushion billiards half a century before the first official three cushion world championship was played in Reims (1928). What a perfect combination: naming the tournament with the largest payout ever for the inventor of the sport 150 years later.

The McCreery tournament will be broadcast with another first: the most technically advanced equipment ever used in 3-cushion billiards.. New cameras both over-head and along the rails will provide views of the game never before possible.

Much about this event has been heralded for its firsts, the size of the prize fund and the technical advances in the broadcasting in particular. But much more remains secret especially tha back-story on the man behind the money. That is a story for aother day!

Perhps the biggest disappointment expressed by many of the fans is that there are no plans for a live audience. The reclusive billionaire who has opened his private estate for the event is only permitting players, organizers and broadcast crew to attend. Nevertheless the event has to be one of the most anticipated tournaments in history - and that itself is another first!

Thanks to Kozoom for the material on this article.