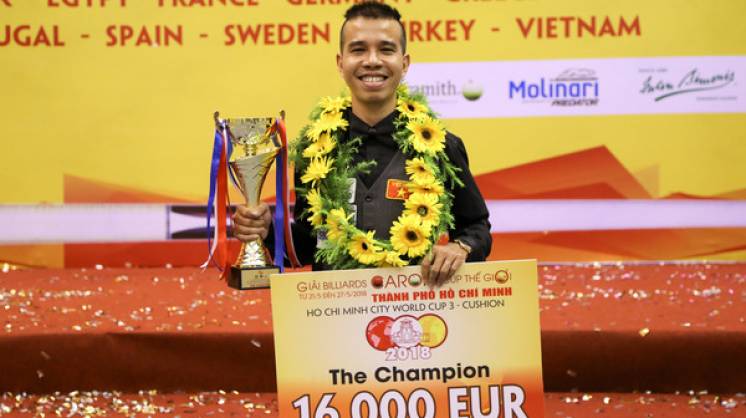 The home town crowds could not have been more proud as they watched the emergence of a new Vietnamese hero. Quyet Chien Tran has powered through a field of the world's top players to win the 2018 3-Cushion World Cup in Ho Chi Minh City, Vietnam (May 21-27, 2018). In doing so Tran has made history as the first player from Vietnam to win a UMB World Cup title.

With his come-from-behind victory over Myung Woo Cho of Korea in the quarter-final to his defeat of world champion and number one ranked Frederic Caudron of Belgium in the semi-final, Tran (pictured left) showed a calm, cool and consistent style that led him to the title. In the final match against fellow Vietnamese player Dinh Nai Ngo, Tran again came from far back and still had his best game of the event winning in a nail-biter 40-39 in 11 innings (2.666 average.)

On the podium next to Tran and Ngo was another Vietnamese star current Asian champion Nguyen Quoc Nguyen who fell in the semi-finals to Ngo. This is the first time a player from Vietnam has won a World Cup, and the the first time the top three finishers were all from the organizing country. What an exciting time for the fans of the great sport of 3-cushion billiards around the world, and especially for the people of Vietnam who welcome their new champion.

For more than a decade we have heard the story: the Korean billiard players are poised to overtake the Europeans. But time after time they fell short with few World Cup wins and fewer still World Championships. Then in a flash the Vietnamese have made a statement: just maybe it is they who are the future of 3-cushion billiards. In what is surely the most spectacular power grab on the elite 3-cushion stage, the Vietnamese players sent home most of the top European & Korean players leaving only Caudron to fight on the last day. With the elimination of Caudron in the semi-finals it was an all-Vietnamese final to the delight of the enthusiastic crowd of 1500.

The final in the Nguyen arena will go down as one of the most exciting in World Cup history. Tran, the more experienced and successful of the two Vietnamese, was put on his back foot by Ngo (pictured right) who had a rocket start to the match. Consecutive runs of 5, 9, 4 and 11 gave him 29 points in just 4 innings and he looked well on his way to the title. Tran did not panic and mounted a great comeback after the interval.

From 33-23 in his favor, Ngo started to struggle. Tran defended mercilessly and Ngo missed seven times. To his credit, Ngo still managed a run of 6 late in the match, but he missed by an inch on the final point. Tran seized the opportunity playing yellow and ran two and out. His last point was a courageous bank shot to secure the title. Having lost two World Cup finals in the past (Seoul 2007 and Guri 2016), this was Tran's day to shine and erase the defeats of the past. Ngo was left with consolation prizes: runner-up and the tournament high run of 18.

As the main event unfolded it had been an incredible downhill slide for Europe's best, while the Vietnamese contingent steadily rose. One by one, the European favorites disappeared from the arena. Spain's Dani Sánchez lost to Turkey's Berol Uymaz, Dick Jaspers (NED) fell to Korean Hyung Kon Kim, Marco Zanetti of Italy to 3rd place finisher Nguyen Quoc Nguyen (pictured left), Eddy Merckx (BEL) to Ngo. Sweden's Torbjorn Blomdahl had a sparkling match and a narrow victory against Tonny Carlsen in 16 innings, but then he too lost big to Ngo.

The one player who resisted was Caudron (pictured right), who did not show his very best but kept winning: Dong Koong Kang, Sung Won Choi and Robinson Morales could not keep up with the reigning world champion. In the semi-final however, Tran beat him 40-39 in a match that could have gone either way. Caudron nonetheless retains his number one ranking on the UMB list. His World Cup win in Antalya and third place in Ho Chi Minh means he is also in the lead for the overall World Cup win in 2018.

The podium of new Vietnamese stars in the World Cup captured the hearts of the billiard crowd. Thirty-three year old Quyet Chien Tran was all smiles as he became the first Vietnamese World Cup winner in history. He and his countrymen Ngo and Nguyen added a new dimension to the World Cup cycle. The emotions and joy of the players and the enthusiasm of the crowd in the Nguyen Stadium have instantly given Vietnam the status of a top 3-cushion country. Congratulations to the new World Cup titleholder - Quyet Chien Tran of Vietnam.

Thanks to Kozoom for the pictures and to Kozoom and UMB for contributions to our story.