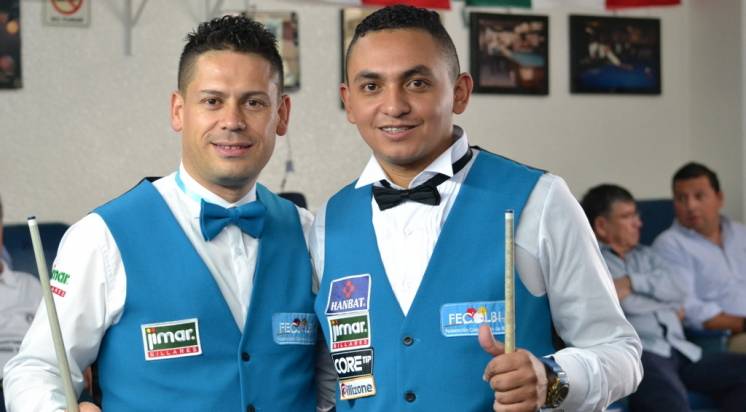 He just came from the billiard table after his victory in the Pan American final and ran straight into a microphone. Colombian Pedro Gonzalez (above left) had just won the most important event in his career and stammered with a trembling voice: "This is for my country, this is for Colombia.'' The emotions were understandable. The 42-year old from Bogota had never achieved a major victory before and now was the Pan American Champion. A fellow Colombian Jose Juan Garcia  was runner-up (above right).

The two American players, both former Pan America Champions were both eliminated in the 32-man knock-out rounds of the main event/ First Hugo Patino, 2016 champion fell to Costa Rican Erick Telles. And then, in the very next round, and in a strange turn of events Pedro Piedrabuena, 2017 champion, also fell to Erick Telles. Neither of the two American champions, or even current USBA Champion Miguel Torres, would be on hand to vie for the 2018 title. Torres had a weak event losing all his games in the preliminary round.

Not so for the Colombian contingent. The final four were heavy with Colombian talent with 3 representing the best of Colombia's great players. But it was Robinson Morales and Jose Juan Garcia who were considered the early favorites -  and then the fireworks began. First Gonzalez defeated his Peruvian opponent Guido Saco 40-24 in 22 innings, while the two Colombians battled in their semi-final match-up for the chance to be champion.

In the championship game, Gonzales faced José Juan Garcia, who reached the golden match by defeating Robinson Morales 40-35 in 27. The final match could not have been more exciting. Facing a former Junior World Champion, Gonzalez had a brilliant start with runs of 6 and 9 in the fourth and fifth inning, giving him an 18-13 lead. The match continued to favor Gonzalez, who led Jose Juan Garcia all the way 24-17, 32-25 and finally at the finish 40-32 in 18 innings. The champion played a fantastic final, one of the few matches in the championship where he managed an average over two (2.222).

Our congratulations goes out to Pedro Gonzalez, the 2018 Pan American Champion. Here's hoping he continues to show us exciting play in International competition.

Much thanks to Kozoom who provided material and pictures for this report, live-streamed the event. For more on this story click here.