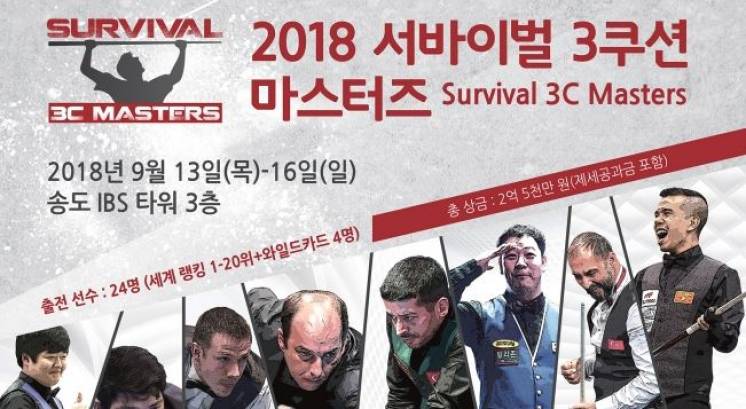 Three cushion billiard fans around the world are ecstatic over the wealth of high quality - and high prize money - events in 2018. The McCreery Champion of Champions would be hard to beat for a single prize fund event. But the new 3C Masters series sponsored by the UMB and Kozoom "in total" will give billiard fans many opportunities to see the top players in unusual challenge matches to test their skills. And all the while they will be competing for tens of thousands of dollars in prizes. Next up: the Survival 3C Masters.

From Thursday September13 to Sunday September 16, the world's best players meet again in Seoul this time at the Incheon Skypark Hotel. They arrive for the 2nd in a series of invitation tournaments organized in cooperation with the UMB and Kozoom. Although no ranking points can be earned for the world ranking the event is much anticipated for both its exciting new format, and the prize fund at stake. The total prize money is $220,000 dollars: the winner earns $50,000, the losing finalist $21,000, the number three $18,000, the fourth $15,000, all the way down to the last in the ranking who receives $4,000.

The 24 invited players are divided into six groups of four and play a game according to a system that is well known in South Korea. The 'Survival' is mainly based on the game formula that Koreans call 'Jook Bang'.

Rules of the Game

- At the beginning of each half, each player will be given 30 points. Each carom scored will result in receiving one point from each of the other players.

- At the end of each half, if Player A is in the middle of shooting, then the half does not end at the end of Player A's inning. Players B, C, and D will also be given the opportunity for one more inning each, so that at the end of the half, each player will have played the same number of innings. If the timer for the first half ends during Player C's inning, then only Player D will be allowed one more inning after Player C is finished, as Players A and B will already had a chance that inning.

- If a player's point balance goes to zero or negative, he is out of the game and cannot continue. However, each player will be given an opportunity to make up their points and get back to positive if they have not yet had their turn that inning. For example, if Player C makes a run which results in Player D ending up with -5 points, Player D is not out until he has had a chance to play his inning. Player D must make at least 2 caroms (to receive 6 points, 2 from each of the other three players) so his balance of points goes to +1 and then he shall be allowed to continue. However, if he is not able to make enough caroms and his balance of points is still zero or negative at the end of his inning, then he is out of the game.

- For another example, if Player A has 4 points after his inning, but Player B made a run of 6, Player A's point balance will be -2, and since he has already had his turn that inning, he is immediately out of the game.

Final scoring to determine the winner of the survival challenge will be total points. If two players are tied for total points, the winner will be determined by their top high run, and if their high runs are the same, then their second high runs will be used.

For those with a Kozoom premium pass the event will be live-streamed. Keep in mind the very large time difference. South Korea is in time zone UTC +9. Here is a link that will be live from September 13-16: Survival 3C Masters You can sign up for a premium pass if you do not have one.

Thanks to Kozoom for their great partnership in bringing exciting 3-cushion play to fans around the world, and for providing the details of this new tournament format.