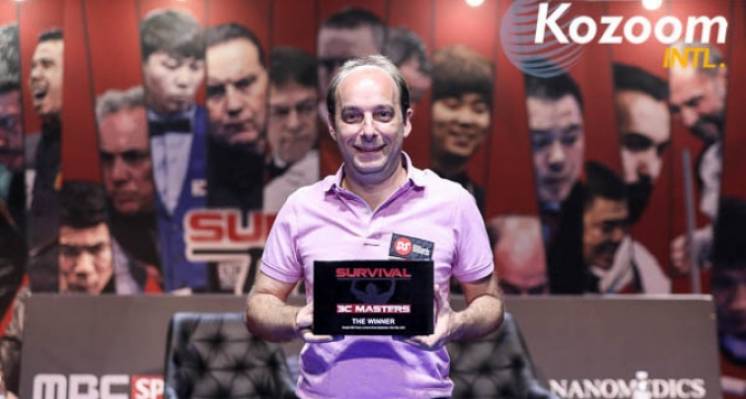 Twenty-four started the Survival 3C Masters event in Incheon, Korea. Four remained on the final day. But it was Dani Sanchez of Spain who proved the most resilient as he outlasted his remaining rivals Semih Sayginer (TUR), Sung-Won Choi (KOR) and Marco Zanetti (ITA) to win the $50,000 first prize and title of Survival 3C Masters Champion.

The unusual format had mixed opinions in the billiard community, but no one can deny the value to the sport of 3-cushion billiards in its large prize fund ($220,000.) Four players were at the table at the same time, each starting with 30 points in the first half of play. Every point made in a players turn was subtracted from his opponents. So a carom was worth 3 to a player and -1 to each of the others. If your total goes to zero - you're out (at least until the second half.) After 45 minutes there is a break, then 30 more points are added to each player, and the second half is played. The winner is the player with the most points when the clock runs out. Some say "brilliant", some say "exciting" others just say "crazy". What do you think. Read more about the format and the rules in our story - CLICK HERE.

This format led to some dramatic and tense finishes, of which the final was surely the most exciting! From Kozoom:

Dani Sánchez had the best start, was passed in the third inning by Sung-Won Choi, who remained on top until the break: Choi 39, Sánchez and Zanetti 35 and Sayginer 7 points. The score changed immediately after the start of the second half, when Sayginer grabbed the lead with runs of 8, 4 and 8 (Sayginer 84, Sánchez 68, Choi 52, Zanetti 48). When there were ten minutes left, Sayginer led 83-63 in his battle with Sánchez, but in the second to last inning, the Spaniard struck again with 5 (75-75). The final round trip for the four players brought the tension to the climax. Sánchez scored twice, giving him a 7-point lead. Sayginer, with the clock at 0 and the last player to score, made his first (76-72), but just missed out his last five-cushion shot.

Said Dani: "I am still shaking, I can feel my heart beat. The tournament was a real 'Survival' for me, because I saved myself by two runs of 9 and 15 in the semis. And now, in the final match, Semih Sayginer could beat me. I was watching nervously on my chair: one carom more by Semih for a shootout and with two more, he was the winner. But he missed an easy shot under great tension."

Most caroms in one match: Semih Sayginer with 140.
Best run: Dani Sánchez with 15.

Congratulations to Dani Sanchez with a stellar performance, and the title of Survival 3C Masters Champion. 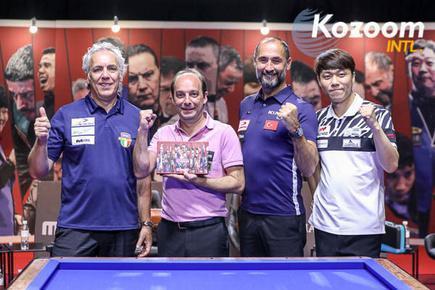 Thanks to Kozoom for livestream, replays, pictures and results.