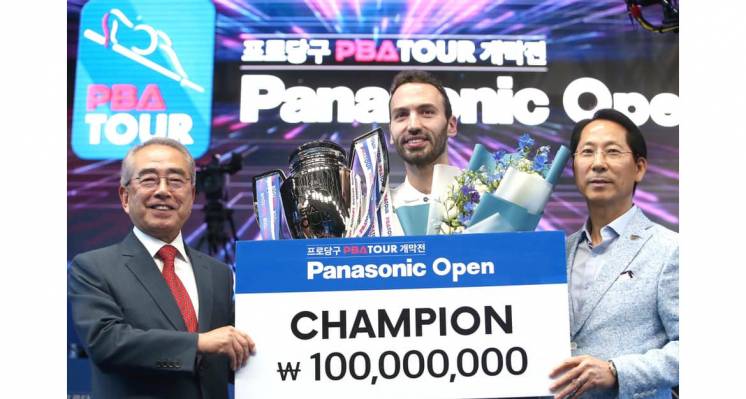 The Panasonic Open, the first major event from the Professional Billiards Association (PBA), was won by Filippos Kasidokostas of Greece. The PBA Tour kicked off their inaugural event with a high level of professionalism, great skills at the billiard table and a huge pile of cash in the prize fund. The first place trophy was accompanied by a first place prize of 100 million Korean won (about $85,000) for the joyful winner.

Kasidokostas, the 36-year-old former World and European champion, defeated 38-year-old Korean Min-gu Kang 4-3 in the best of 7 match to secure the title. Along the way, second place finisher Kang wowed the crowd as he advanced through the ranks and made it to the finals. A relatively unknown among the top Korean players, his great finish here is the best result of his career, topping his last 16 round appearance in a world cup two years ago.

The tournament started with 128 participants, with the majority (more than 100) coming from Korea. The twenty non-Asian players included fifteen Europeans, along with American star Pedro Piedrabuena and Colombian Robinson Morales. The preliminaries were played in the popular Survival format. Then the format changed in the last 32 to a single elimination knock-out stage played in sets. Some other rule differences from traditional International events was the draw for random break shot position, unusual up and down log, and two points awarded for rail first shots. Interesting... but the jury is still out on whether these changes will help or hurt the game.

American Piedrabuena played a fantastic tournament, and made it to the semi-final round before falling to the eventual second place finisher Kang. In the other half of the final four who made it to the podium was another Korean Sung-uk Oh. Oh had eliminated Frédéric Caudron earlier with a crushing final set of 15-0, but was beaten by Kasidokostas in their semi-final match, setting up the Greek for victory.

Filippos Kasidokostas is surely a revelation as the winner of this first PBA event. It was only three years ago that he made his comeback in the global circuit after physical problems with his shoulder and arm. Incredibly he switched from shooting right-handed to left-handed and literally relearned how to play at a world-class competitive level. In an interview he explained: "I had to change my hand, because it was shaking all the time when I tried to play and it was not easy to play with the other arm. But I love my sport and I had no other chance to continue my career." In the three years since his return, Kasidokostas has made miraculous accomplishments. In this year alone, Filippos reached the final in a World Cup... and now his victory in the Panasonic Open signals he is definitely back at his previous level.

The final 8 (country and prize money in US Dollars):

Thanks to the PBA and Kozoom for material, statistics and pictures used in this story.