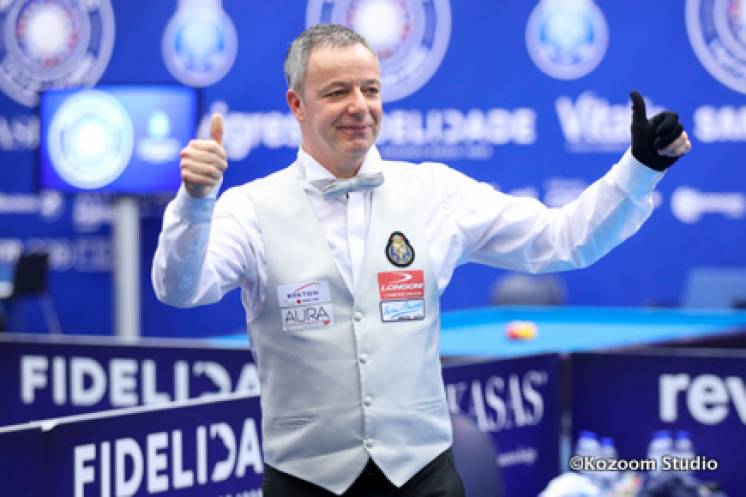 World Champion and number one ranked Dick Jaspers of the Netherlands defeated Korea's Haeng-Jik Kim in a tough fought final match to win the fourth event in the series, the 2019 UMB World Cup held in Porto, Portugal.

Jaspers had no easy road to the podium. In the group stage, he averaged extremely well but qualified as second, after a 15-inning loss to Dane Jacob Haack. His win over Eddy Leppens was hard fought with the Belgian missing a few make-able shots letting Jaspers capitalize.

In the quarterfinal, Jaspers was up against Dani Sánchez who was in great form. The world champion gave him no chance: 40-24 in 15. The semi-final match between Dick Jaspers and Lütfi Cenet was perhaps the most dramatic. The Dutchman's fantastic start, with an early 17-run, put him ahead and comfortable. Lütfi Cenet down 23-9 after seven innings showed nerves of steel as he started to catch-up. With two runs of six he was able to eventually take the lead in the 16th inning at 35-34. But a devastating miss by a miscue broke his rhythm. Even when Cenet was first to reach 40, Jaspers equalized with a run of three forcing a shoot-out. There Cenet collapsed, missing his first attempt long and giving Jaspers an easy one to take the match.

The final was another exciting affair with Jaspers retaining a lead for most of the match as Haeng-Jik Kim kept missing close ones to interrupt a chance for a big run. Nonetheless the Korean fought hard and even caught up to take the lead 35-33. But Jaspers proved best finishing strong with runs of 5 and 2 to win 40-36.

The next World Cup event is scheduled in the Netherlands in October and may have a different look if the UMB follows through on banning players who have elected to compete in the new Korean PBA Tour. In the interim the much anticipated Verhoeven Open at Carom Cafe in New York is coming In August.

The final ranking in the World Cup in Porto (average/high run):

Complete results of all pre-qual rounds through to the finals are available here. Thanks to UMB, Cuesco and Kozoom for pictures and stats used to compile this report.

Congratulations to Dick Jaspers 2019 World Cup Porto Champion. He is pictured below on the podium with Haeng-Jik Kim, Myung-Woo Cho and Lufti Cenet. 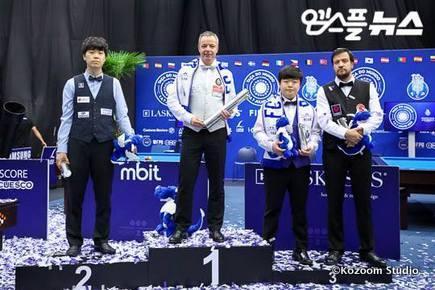