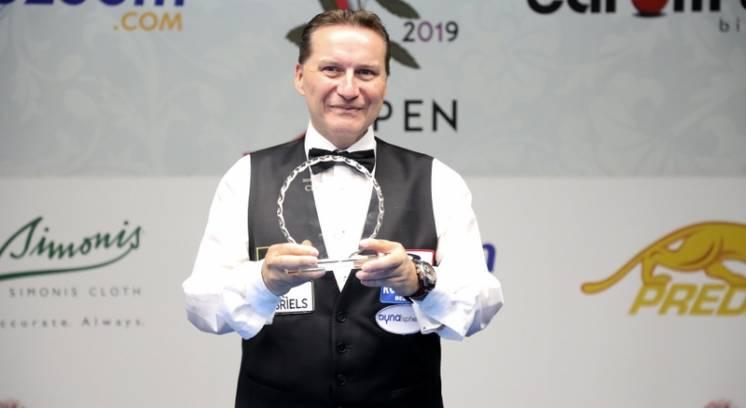 The 2019 Verhoeven Open in New York ended in a day of mighty triumph for Belgian Eddy Merckx. The defending champion in the event – having beaten Germany's Martin Horn in the 2018 final – was literally unstoppable in his repeat run for the trophy. Merckx finished the event unbeaten in 12 games and capped his win in the final match against Torbjorn Blomdahl with a majestic run of 18. Simply breathtaking.

After winning his quarterfinal match against fellow countryman Roland Forthomme, Merckx exploded with two epic back-to-back performances to finish the tournament in the grandest style imaginaable. First he met Spain's Dani Sánchez in the semifinal. There Merckx posted his best game of the event finishing the match 40-13 in just 9 innings (4.444 average.) That setup the final against the great Torbjörn Blomdahl of Sweden. After a see-saw battle in the earliest stage of the match Merckx unleashed a furious final sprint winning in 10 innings 40-10 with another "4" average, closing the match with a run of 18 that awed the crowd at Carom Cafe.

The tournament format had the more than 100 entrants battle in a preliminary round-robin to advance to the first stage of the finals. There four seeded players entered in the groups of 10 in the round-robin 1st stage. The four seeded players were chosen from the world's best - and they showed it - as all four not only advanced to the single-elimination knock-out stage, but made it to the final four - the penultimate semi-final round. (Pictured below.)

Many other players showed incredible skill during the event. Most notably was Myung-woo Cho of Korea who posted the most brutal win in his Group A 1st Stage match against Eric Kwon - 35-0 in 7 innings (5.0 average.) But that wasn't even the best game of the event! Dion Nelin unleashed an incredible 25-3 victory over Christian Portilla in the Qualification stage - an astounding 8.333 average. His run of 16 was the best in the event... until Merckx final turn at the table in winning the final match!

The final standings of the last 8 (average and high run): 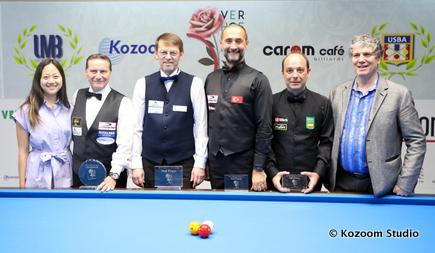 The first prize in the New York tournament this year was $9,000 dollars with $7,000 going to the runner-up. This was even higher than the original flyer had promised, a testament to the popularity of this much anticipated event hosted by Carom Cafe owner Michael Kang and run by Tournament Director Charles Brown. The players, spectators and fans online are already looking forward to the 2020 installment.

Much thanks to Kozoom, UMB and Cuesco for pictures and statistics in preparing this report. To view replays of key matches go to Kozoom where you will need a premium membership. Below is a complete re-cap of the event.

Eddy Merckx puts on a show... a stunning performance... winning the 2019 Verhoeven Open Tournament. His final two games were played at better than a 4.0 average, with a run of 18 in the finals against Torbjorn Blomdahl in his 40-10 championship effort. This is two years in a row that Merckx has won this event. Complete Tournament Resources below (click any image to expand) 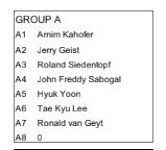 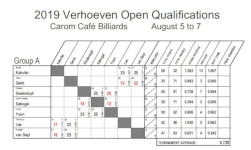 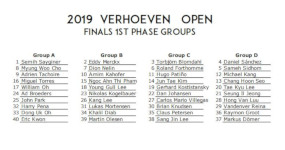 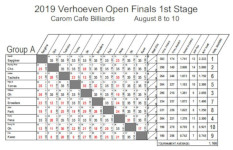 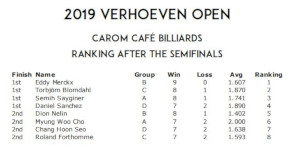 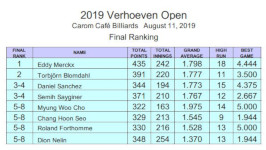