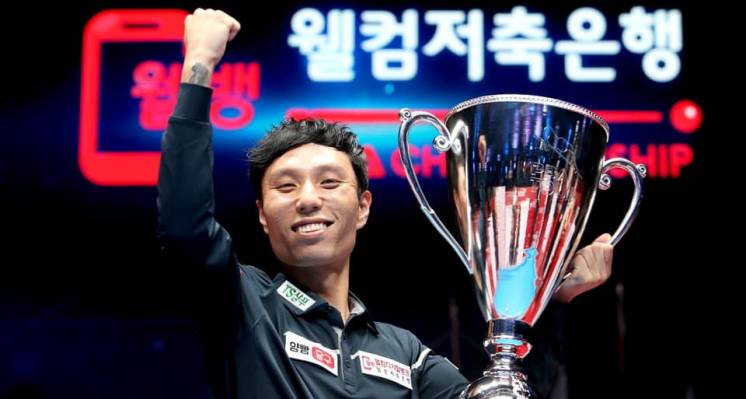 Won-jun Choi, another somewhat obscure Korean 3-cushion player has won the third event in the newly formed Professional Billiards Assocation (PBA). Many of the world class European players who have elected to give up playing in UMB events in favor of the opportunities in the newly formed league ended far down in the rankings this time around. When, if ever, will they regain their dominance?

Korean Jung-suk Lim was the winner in the ladies event and extended her title.

David Martinez was the best of the Europeans, with the Spaniard reaching the final four in the tournament. Martinez was defeated by the ultimate winner Choi 3-1 in sets. Martinez earned 7,500 euros for his place in the quarterfinals.

For those who  are watching, the European players who participate in PBA events face sanctions and are banned from playing in UMB events. The eventual outcome of this inter-organization rivalry is yet to be determined. But it is interesting to see how far down in the rankings the top players managed to achieve. The expected domination of players such as Frederic Caudron has yet to materialize. Even Filipos Kasidokostas, the winner of the very first event, could only place 106 in the field this tournament.

The PBA maintains rankings based on the players placement in the events. Apparently the ranking points closely match with the value in Korean Won earned by the players. Filipos Kasidokostas is currently on top followed by six Korean players. Only David Martinez, American Pedro Piedrabuena and Javier Palazon are in the top twelve.

Reaction to the new league, new formats and certainly the appearance of favoring the Korean market for fans has been mixed. Some think this is a refreshing change for the better. Others are disappointed that the events are difficult to find and watch, given most information is in Korean and there is such a time difference with the large billiard fan base in Europe and the Americas. Where do you stand on this issue?

We will continue to follow the action closely. As always our thanks to Kozoom and PBA Tour for information and pictures used in this report.