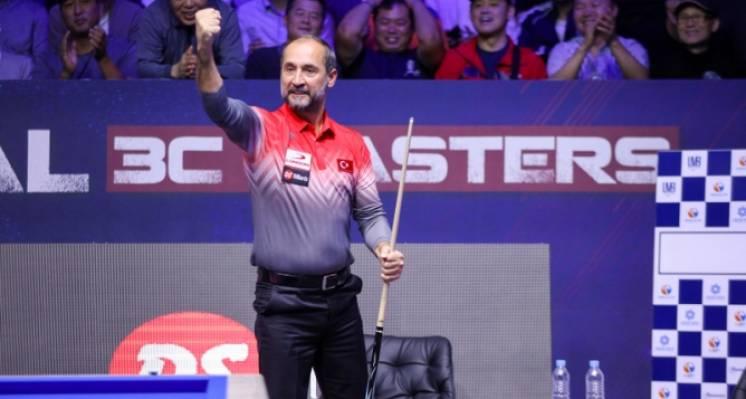 Semih Sayginer has won his first major event since his return to International 3-cushion billiards. The Survival 3C Master Tournament held in Seoul, Korea was the perfect platform for Semih's magical stroke and deft problem solving skills as he made his final sprint in the closing moments to take the crown.

Sayginer prevailed over a tough four-man final field which included Jae Ho Cho, Eddy Merckx and Haeng Jik Kim. The Turkish prince, also called the wizard of billiards and the magician, grabbed the victory and the $50,000 first place prize. The Korean audience witnessed (and cheered) Sayginer's brilliant play and steely determination as he fought his way to the top of the podium. 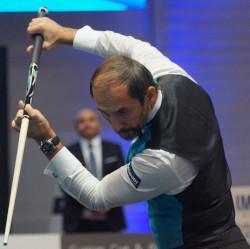 Said Sayginer after the ceremony:

"I'm back in my hotel after a long talk with the press and celebrations in the venue, but now I can say: I'm really happy to win. Of course I was pushing so hard to take my first big win. I was practicing a lot, preparing myself, updating my game. But not only that. I had to adapt a new kind of 3 cushion. And now I can say: I did it well and I can be happy, even though I was the last to come to the final. I had to make a big attack, but I had the right mind set. And after the first session, when I missed a massé in the hole, which was a mistake, I was upset and I told myself: Semih, just wait when they give you a chance. I was waiting, faced some hard shots, but I made it. I really survived, I needed it, because I missed it so hard."

Sayginer had interrupted his 3-cushion billiard career, not without controversy, while he pursued another love of his as an entertainer. Fortunately for us at 54 years old Sayginer has returned to share his incredible 3-cushion skills in a second go as a world class professional billiard player.

The fifth in the Survival Masters series from Kozoom was marked by high runs and many averages over 2.0. The absolute highlight came from Jae-Ho Cho in the quarter finals. The Korean exploded with a tremendous run of 26 just two short of tying the world record. Cho reached a score of 160 points with a 4.071 average in that match. Also in that session Semih Sayginer played 3.250 with 165 points and a run of 13. Haeng-Jik Kim was the third with an average of 3.153. Wow!

If you are not familiar with the fascinating and challenging format of the Survival 3C Masters series click here for our original report.

The ranking in the final match with score, average and high run:

One special highlight of note in the event was the performance of two young Korean players. Entering in the early qualification rounds, Dae-Hyun Jang and Ji-Hun Ahn, made a stunning debut reaching all the way to the semi-finals. It was wonderful to watch the two youths face up against the old guard. If these two young talents are any indication, surely we have been witness to the future of billiards.

For now we heartily congratulate the magician Semih Sayginer - who joins previous winners Caudron, Sánchez, Jaspers and Merckx as the Survival 3C Master.

Thanks to Kozoom and 3C Masters for pictures and stats in preparting this report.