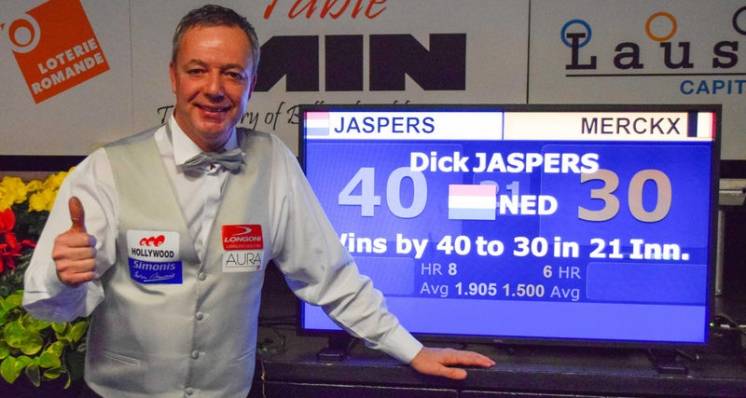 World Champion DIck Jaspers of the Netherlands defeated Belgian Eddy Merckx to win the Lausanne Billiard Masters. This was Jaspers' third visit to the top of the podium, having won previously in 2015 and 2017. Merckx was the 2018 defending champion. Only Marco Zanetti (2013 & 2014) and Dani Sanchez (2016) have won the title.

The tournament in Lausanne is an invitational event where the best players in the world compete in the most wonderful of conditions. Included in this the 7th installment were nine of the world's top players by ranking.  Along with the world champion were the women;s world champion, the junior world champion and the European junior champion

Dick Jaspers dethroned the 2018 titleholder, Eddy Merckx, after the Belgian had shown his grit with an end rush against Dani Sánchez to earn his spot in the final showdown. Jaspers reached the final battle with a victory over Myung-Woo Cho. The young Korean star was making his first appearance in the event this year and showed the crowds why he will surely be returning again.

The pre-match stats tilted in favor of Jaspers, who had won four of his five prior matches against Merckx. And the result bore out that prediction. With two big runs, of 7 in the 3rd inning and 8 in the 11th, Jaspers too a lead and never looked back. The Dutch world champion opened a gap t the closest mid-point score of 16-15 taking a small lead, maintained though 30-25 where he reached the victory with a final score of 40-30 in 21 innings. Merckx missed too many close billiards and was frustrated, not being able to string together one of his big runs to come from behind.

And so the red carpet was rolled out for the four top players on the stage in this installment of the Lausanne Billiard Masters. Congratulations to the winner Dick Jaspers pictured below with his fellow finalists (left to right): Dick Jaspers, Eddy Merckx, Dani Sanchez Sánchez and Myung-Woo Cho. 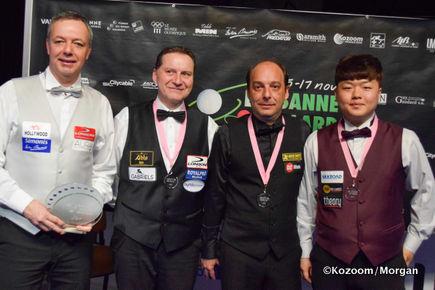 Thanks to Kozoom and Lausanne for pictures and statistics used in preparing this report.