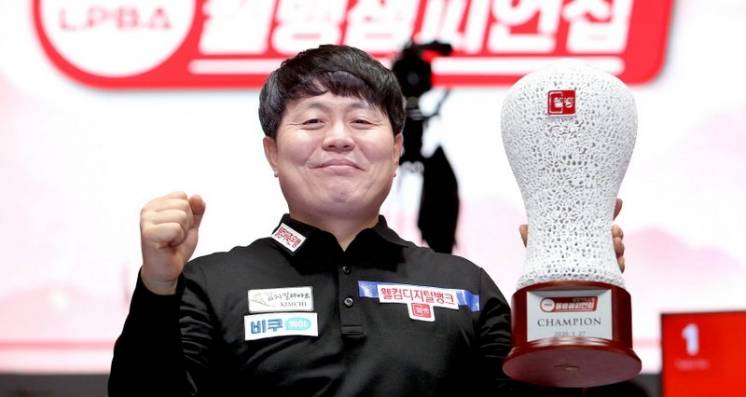 The 7th PBA tournament held in Seoul, Korea ended with a Korean winner for the fourth time. 46-year-old Byoung-ho Kim, just number 70 in the PBA rankings at the start of the competition, and considered an outsider in the field, played an amazing tournament. In the final match he topped Spaniard David Martinez in an emotional finish that was the best result of his career.

The attraction of the PBA is the opportunity to change a player's fortunes in an instant. Once again the top prize was a staggering 75,000 Euros which equates to ranking points in the PBA and thus moved Kim from number 70 to number 7 in the rankings. The top ten in the PBA ranking list have won a combined total of more than one million Euros so far.

The "renegade" European players, who have been banned from UMB World Cup and other "official" events for their decision to play in this new league still dominate. As of this writing Spaniard David Martinez holds the top spot with 150,500 points, Filippos Kasidokostas of Greece is second with 122,500 and Belgium's Frederic Caudron third with 122,000. USA player Pedro Piedrabuena is 16th with 16,500 points.

Here at 3-Cushion Billiards we post the event schedules and report on the results for all International, USBA and regional tournaments. Click to view our event calendar or read more on US and world 3-cushion news.

Thanks to PBA and Kozoom for pictures and material used in this report. To read more about this PBA Tour event including ladies results CLICK HERE.