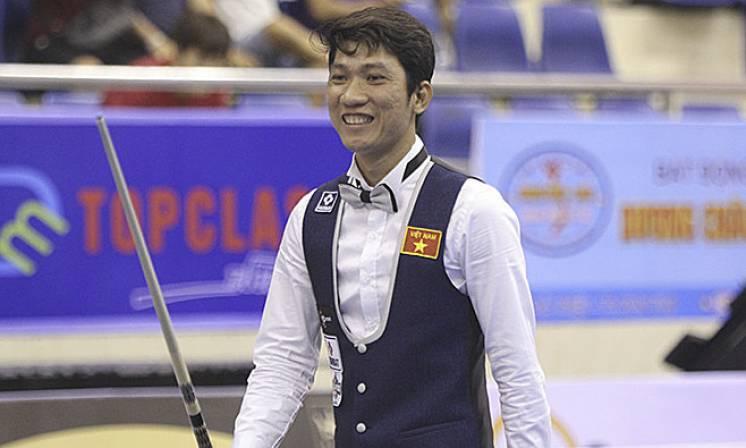 Continuiing the dominance of Vietnamese players during the strange Covid-safe 2020 billiards season, Ngo Dinh Nai was crowned champion of the UMB Virtual One Carom Challenge 3-cushion tournament  on September 18. He beat number one seeded Belgian Roland Forthomme in an intense final to take the prize.

Nai (25th in the world) and Forthomme (20th) went back and forth, the latter scoring seven consecutive points to lead 14-8, before extending the gap to 21-12. In answer, Nai scored eight points to total 20, while Forthomme stood on 24.

In his 10th round, Nai scored another eight points in a crucial shot to make it 39-33. Forthomme later scored another seven to push the score to 42-43. Next, Nai missed scoring a title-clinching seven points, but capitalized on Forthomme’s mistakes to win 50-46 after 17 rounds.

As tournament champion, Nai won $2,367, a sweet revenge for losing to Forthomme in the group stage.

The UMB Virtual One Carom Challenge hosted from September 14 to 18 was the third challenge this year. Two players use their home or club table and play a virtual match to 50 points, every inning starting with the break shot.

In the most recent results, Vietnamese players across both major 3-cushion organizations - the UMB and the PBA - have been victorious. Check out the recent win of Nai's fellow countryman Ma Minh Cam who let his team to victory in a recent PBA event.