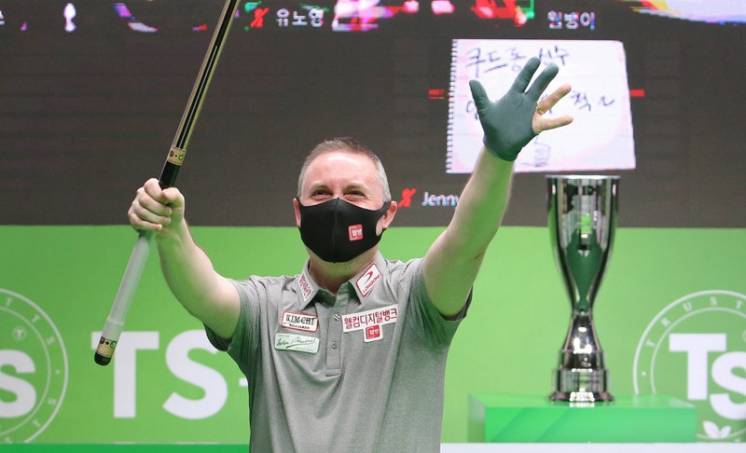 Frederic Caudron dominated the final match over Filippos Kasidokostas in a 4-0 victory that gave him his second PBA Championship win. The event known as the TS Shampoo PBA Championship was played over an extended period due to Covid restrictions. But even Caudron's mask could not hide the joy he felt in winning the tournament.

Both Caudron and Kasidokostas played strong matches in the early rounds to advance to the finals. But Caudron had the better of it in the end with more consistency and creativity. Caudron took 16 set wins in five matches in the knock-out rounds and lost only 3. He won his Survival groups with 112 points in the 64-round with 1.952 on average, and in the 128-round with 113 points and 2.500. Caudron's tournament average was 1.983. His Greek rival made his come-back after a period of illness with 12 sets won in the knock-out rounds and 6 lost sets, including the 4 in the final. He scored 68 points in the Survival round with 64 and 2.357, and in the round with 128 players, 74 points and 2.059. Filippos' overall average was 1.993.

Of note for US fans is Pedro Piedrabuena, eight time US national champion, who tied for fifth overall.

The top ten at the TS Shampoo PBA championship:

Quite a difference in the UMB and PBA... and not just the change from formal dress to casual. The so-called upstart organization seems to be gaining strength in spite of the worldwide lockdown, while the UMB continues to meander. The prize money fueled by consistent sponsor support is beginning to pay off for the European players who were offered a chance to participate in the new Korean league. And for many they will hardly miss UMB events which are not even on the schedule at this time! So much for "banning' players.

The story of this rivalry will continue in the boardroom and the press, but for fans it is always the rivalry at the table that counts the most.