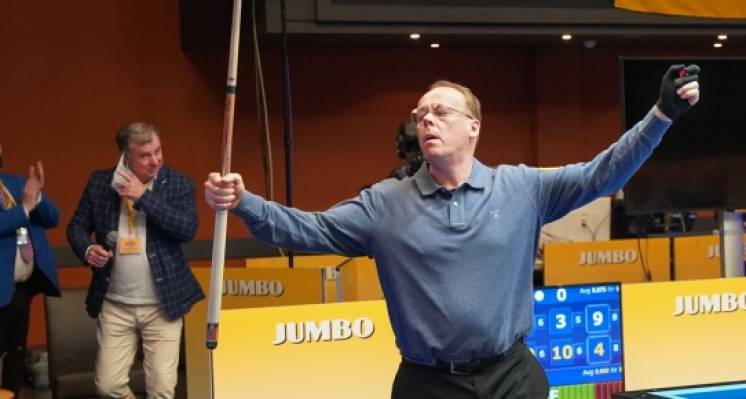 He could hardly hold back his tears on the final podium at the Dutch championship, when the national anthem sounded through the arena. The wonderfully happy Brabant player Ludo Kools, the 53-year-old rookie at the Jumbo Masters, crowned a bizarre adventure on the final day with the Dutch three-cushion title. He was a brilliant winner, an unlikely champion, rewarded with a ticket for the World Championships in Korea.

'I'm so happy, this is so fantastic, can you imagine, a debutant with no chance who becomes the Dutch champion'', he boasted right after his victory in the Masters final against Raimond Burgman, 3-2. ''I am sure now, miracles do exist.''

The end of the tournament, after five days of billiards in front of empty stands, was almost unreal. The shy, amiable Brabant player, a former construction worker, stood there amidst professional players like Raimond Burgman, whom he defeated in the final, the number one of the world, Dick Jaspers and the billiard hero of the region Jean van Erp. Three players from the absolute Dutch top team, beaten by an absolute outsider without any major titles. ''I have been working very hard my whole life, now I don't care about making money, I just want to live'', he said with an emotional, trembling voice.