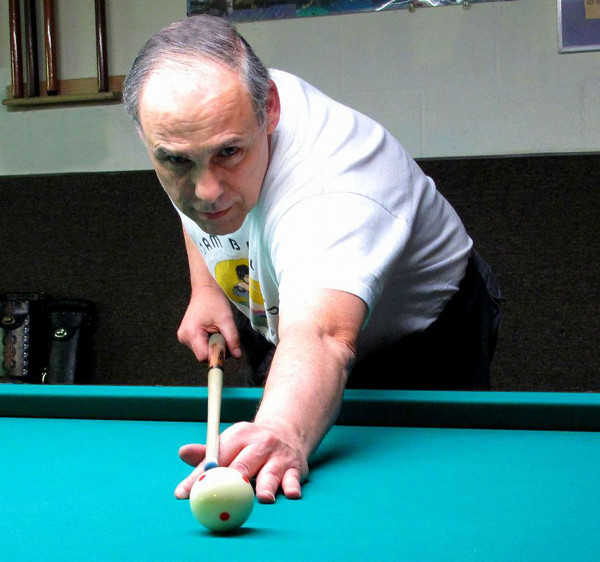 You don’t have to be a rocket scientist to play three-cushion billiards, but it sure can help if you are.  And being a former executive of a company full of rocket scientists is even better. (Original story published January 4, 2013 courtesy of Andy Janquitto)

Phil Panzera, a 63-year old retired CEO of an aerospace company, isn’t satisfied with a run-of-the-mill natural when he's on the billiard table.  No, his love is the unnatural shot: the artistic, the unusual, anything with a flare or a high degree of difficulty.  Phil calls them novelty shots, and he’s always on the prowl to add to his amazing repertoire of incredible shots.

Originally from Long Island, New York, Panzera grew up playing the pocket game, but he was mainly drawn to the challenge of bank shots.  Over the years, simple one-cushion banks grew into two rails, then three and even four.  From there the transition into carom billiards was seamless, and Panzera started playing three-cushion regularly about 20 years ago.  He now plays out of the Burbank Elks Lodge outside Los Angeles.  Although no stranger to the fundamentals of the ordinary three-cushion game, given a choice of shots, Panzera prefers the extraordinary solution.  Many of us can make a three or four cushion shot, but how many of us can make (or even see) a 10-rail ticky, a 7-rail kiss back or a kiss-back-cross-table time shot?

“I stay up late at night thinking of possible shots,” he explained recently in a telephone interview.  “I even dream of shots.”  Couple Panzera's love of the game with his beautiful stroke, and the result is a dizzying array of one incredible carom after another: the uphill ticky, the fouette, the corner to corner freeze, a five-rail draw.  And this list hardly scratches the surface. In addition to the shots that can be played in an ordinary game, Phil has created trick shots with various props or obstacles.  There are tube shots and bungee shots and wing shots.  There’s a shot with a plastic cup and another with a rubber coil.  There’s even one mystical shot where Panzera coaxes the cue ball to score with a wave of his magician hands.  And then there's the Dynamic Duo shot, where Panzera is joined by local player Gilbert Najm to play a duet with six balls, shooting directly at each other at the same time, creating a head-on kiss and two resulting three-cushion points.   You have to see it to believe it.

If you ever find yourself in the Burbank Elks and see a tripod with a digital camera focused on a Verhoeven table, that’s probably Rocketceo working the kinks out of another novelty shot he conjured late one night. Below you can find a collection of his best Trick Shot Videos from Phil's YouTube Channel.