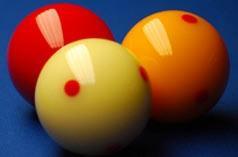 The game of 3-Cushion Billiards is believed to date back to the 1870's, although the exact origins remain both unknown and in dispute. The fascination we players have with the game is undeniable, and the challenge in solving shot patterns has helped the game endure and thrive despite the great difficulty it presents to master. Even if you never lift a cue, watching the game will fill you with awe, especially when a top level player makes the cue ball do things you never imagined were possible!

Enjoy this short video from New York player Ira Lee, a computer programmer and billiard enthusiast, who provides some great examples of the different ways a point can be scored in 3-Cushion Billiards: