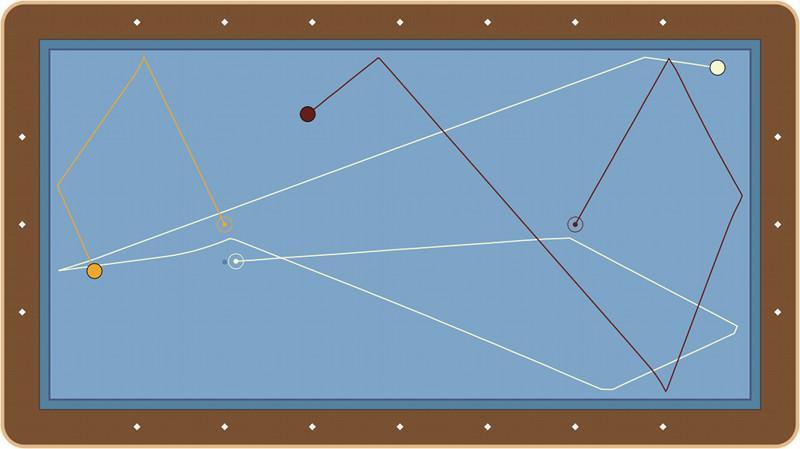 The beauty and bane of the lucky shot

Ah, the Mikey D. The lucky shot! There is often beauty in that accidental tally. How the scoring track is changed by a feather, re-directing the errant cue ball to the proper path. From the chair, it is mesmerizing as the shot unfolds, and the balls, seemingly controlled by magnets under the table, roll steadily to their appointed rendezvous. At times, the shot is so ugly (kiss, kiss, cushion, kiss, score) that its ugliness is beautiful—like a cult classic movie. Top players often find comedy in the lucky shot. During the rare times that he makes an accidental score, Frédéric Caudron has been known to burst into laughter, apparently amused by the bizarre paths the balls have taken.

The lucky shot goes by many names. Of course, a “lucky shot” is a good description, easily understood, but lacking in the eloquence of the vernacular of the billiards world. Each room may have a player who has become an eponym for the accidentally successful stroke at billiards, but such a term has no currency beyond that room. Billiard players in Kansas or Zundert do not call a lucky shot, a Mikey D. There are many other terms that have entered the billiard lexicon to describe when the fickle finger of fate touches the balls. Bert Van Manen in his marvelous book, The Blomdahl Era, contains a nice list on page 114, some of which are considered here in more detail.

Over a hundred and sixty years ago, dictionaries recognized the word “fluke” as referring to a lucky shot in billiards. The word emerged in this usage in England no later than 1857, when English billiards—a combination carom-pocket billiards game played with three balls on a snooker table—was the rage. First used as noun (he scored “by a fluke” or “made a fluke”), it morphed into a verb in the 1880s (He “tried for a cannon but fluked the white....”). The origin of the word is not known. Some argue that it comes from whaling (also the rage in the mid-1800s). A whale’s tail consists of two lobes, called flukes. When harpooning whales (Moby Dick like), the harpooner aims for the body of the whale, whose vascular system is such that a carefully aimed harpoon can cause internal bleeding and death. But a poorly-aimed shot might hit the whale’s tail—in one of the flukes. A fluke shot, one might say. It’s a great etymology. And one of doubtful truth. Michael Shamos in his The New Illustrated Encyclopedia of Billiards repeats that story of the origin of fluke, citing the Oxford English Dictionary (OED) as a source, but the OED merely states that the origin of fluke is unknown. Other sources reject any connection to fish, fins, whales or tails. The Word Detective says, “The connection between ‘fluke’ in the sense of ‘fin’ and ‘fluke’ meaning ‘a lucky accident’ is easy to explain. There is no connection, and the two words, as far as anyone has been able to determine, are completely unrelated.” In today’s billiard world, fluke is rarely used, having lost its place to more colorful terms.

“Scratch” is used frequently. Scratch is also used in the pocket billiard world to refer to a foul—when the cue ball drops in a pocket. But carom billiards did not borrow the term from the pocket game. The Online Etymology Dictionary traces the origin of scratch as meaning a foul in pocket billiards to 1909, but scratch meaning a lucky shot was used as early as 1850. Why scratch referred to a lucky shot, then later a foul in pool, is not clear.

There is the “garbage shot” or the “slop shot,” no doubt a derivative of a sloppy shot. Players often use the latter variety as a verb: “He slopped one.” A close cousin is the “sh_t shot,” as in “We were hill-hill, and then he made a “sh_t shot.” This variation is also used in verbal form. Of linguistic note, the proper preterit is “shat,” not “sh_tted.” As in, “We were hill-hill, and he shat one.” Proper grammar is a sign of a gentleman, and all 3-C players are gentlemen, making scratches or well-designed shots.

“Cluck” and “clunk” are used as nouns or verbs, e.g., “We were hill-hill, and he clucked one.” Or “clunked” one. It doesn’t matter. The end result is the same. “Cluck” perhaps descends from the sound a chicken makes, which is similar to the sound of billiard balls colliding. Animal names are frequently used. A lucky shot is a “dog.” The Turks use “balik,” meaning fish. The Germans use “fuchs,” meaning fox. “Canard” (duck) is used in France. Rana (frog) or rana a sapo (toad) is used in Mexico. Vietnam has emerged in recent years as a 3-C force. Among the Vietnamese, the lucky shot is called, “rùa thấy mẹ,” which means a “found mother turtle.”

The Italians have several words. “Culo” refers to that part of the anatomy upon which one sits. “Una Macchia” might be understood by customers of Starbucks who order the macchiato. From the verb macchiare, meaning to stain, the giocatore’s cry of “una macchia!” means a “stain.” As in, “Siamo stati hill-hill, poi lui ha fatto una macchia! Mio dio!”

Some players from Mexico use “churro,” which also describes a pastry or marijuana joint. Churro, in the billiards world, perhaps borrows from the pastry, meaning a delicious treat. And in some Mexican rooms, the rail birds applaud the churros. After all, in a game between two competent players, the churro is a rare shot, truly to be recognized and applauded. A sign of good fortune.

A very popular word in billiard halls for the lucky shot is Colombian. “Chimba” is a slang word of varied meaning depending upon the context. It is often used as a vulgar reference to...let me be careful...the female sexual reproductive organ. Showing its versatility, it is sometimes used (again being careful) as a vulgar reference to the male sexual reproductive organ. And sometimes “chimba” has no vulgar meaning, used to mean “awesome,” as in “Que chimba!” (How awesome!). One should be cautious, however, in using the term outside of a billiard hall as one never knows the context in which it will be taken. In the sala de billar, a chimba is understood to mean a fluke, a cluck, a dog. The word is often whispered, as in, softly, “We were hill-hill, and then he made a chimba.”

There is an etiquette attached to a lucky shot that applies to both the perpetrator and the victim. One should not gloat when making a chimba. A certain reverence and respect to the game and your opponent are necessary. A wave of the hand to acknowledge the fateful run of the balls is common. Or a self-deprecating chuckle followed by a verbal apology to the opponent. Or, Marco Zanetti-like, a pronounced bow showing deep sorrow. Wise-cracks like, “Exactly as diagramed,” or “I use a system for that shot” are frowned upon except in a friendly game (a very friendly game). As for the player in the chair—the victim of the accident—a mere nod of the head is all that is needed. Sometimes, a tap of the chalk on the ferrule shows a nice mixture of sportsmanship and resignation.

Beyond the etiquette, deep inside, thoughts often betray the outward gesture. Does the tennis player truly regret the net cord winner? When the ball hits the flagstick on a chip shot and falls within a foot or two of the cup, does the golfer bow to the others in his group? Is the lucky shot merely the Billiard Gods’ way of righting the universe, making amends for a kiss out in a prior game? Does the victim think, Why me? Is it just karma, or do players, like Mikey D., have a knack—have the good fortune—of being in the right position for the wrong shot that turns out right?

These are questions too difficult to answer. What is known, however, is that the lucky shot often proves crucial in a game that is too often ruled by randomness and chance. And herein lies the cruelest fact. The concept of the “obligatory second.” The lucky shot has tipped the world ever so slightly that the player is obliged to follow up with another point, no matter the difficulty of the shot or the skill of the player. He must appease the Billiard Gods and continue the torture. It’s a given. And sometimes, the lucky shot gives birth not only to the obligatory second but to a run of three or four or more. The Billiard Gods can be wanton and vindictive. Or as one player has phrased it, “It’s not the dog that gets you, it’s the puppies.”

ABOUT THE AUTHOR: Andy Janquitto is a former USBA president who is deeply sorry for all the lucky shots he has ever scored. Writing, like 3-C, is one of his hobbies. He likes to play with words but usually loses. For another one of his writing efforts, visit www.oleoheir.com.