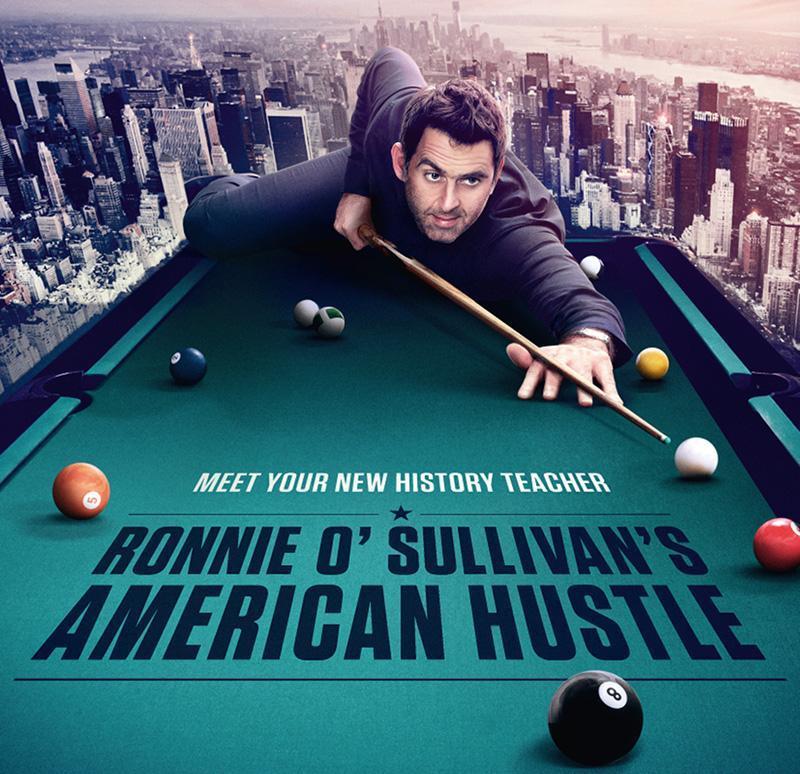 Snooker players are generally considered to be extremely dexterous and adaptable and the majority of them have probably flirted with the idea of trying their hand at other cue sports. Very few European players have been tempted by 3-cushion billiards over the years, but the great Ronnie O'Sullivan has recently bucked that trend. The 41-year-old traveled to the USA as part of his new TV series Ronnie O'Sullivan's American Hustle for the History channel where he enjoyed the opportunity to sample the game.

O'Sullivan is one of snooker's most notorious characters and has built up a significant fan-base over the years. Despite his ups and downs, he's vowed to continue playing the sport until the age of 50, according to Sky Sports, but that hasn't stopped him sampling different sports and past-times during his semi-regular breaks from the game. There is some crossover between both snooker and 3-cushion billiards and it would be easy to assume that players could slip seamlessly between the two codes but that simply isn't the case.

During his 3-cushion billiard lesson, O'Sullivan said "it looks easy...but it's not". The former lawn game requires deadly accuracy and pinpoint precision and the professionals often make it look easy. The Chiswick-born sportsman is known for his quick-thinking around the table and would appear to be a natural fit for the game. He has dominated his field over the past couple of decades and continues to out-think his peers at major tournaments. As of September 19th, he is the 7/2 favorite with Betway for December's UK Championship and is likely to continue adding silverware to his already-extensive collection. Even into his fifth decade, many believe that he could still excel in a different sphere and 3-cushion billiards has certainly taken his interest. Alan McManus is another player who many believe could adapt fairly easily to the game. 'Angles' has recently joined the WPBSA board but still remains extremely sharp and has enjoyed tremendous success on the circuit.

The game started life as a lawn game and has steadily grown in popularity over the years. The calendar is jam-packed full of top-class events with the McCreery Champions of Champions offering the biggest prize in the history of the sport. The first staging of the event was played in August 2018 with a $150,000 prize purse on offer to the winner. The final was all-Belgian affair with Frederic Caudron beating his fellow countryman Eddy Merckx. The world number two soon bounced back from his disappointment with a victory at the Kimchi Super Prestige which took place at the beginning of September.

The mechanics of the two games are fairly similar with accuracy required in both disciplines. Snooker players use more of their cue which helps them follow the potential path of their shot but some 3-cushion billiard players have also been known to adopt this technique in recent years. 3-cushion is technically challenging and influencing the direction of the cue-ball is part and parcel of the game. Snooker players can perfect certain shots which change the direction of the cue-ball but this isn't their primary concern. Inconveniencing your opponent is something which is an underrated skill in snooker but potting the ball is the bread and butter of the game. In 3-cushion billiards, it is estimated that there as many as 15 different techniques that can be used to alter the direction and destination of the cue ball and these are routinely deployed by top players such as Frederic Caudron and Dani Sanchez in creating their magic on the table.

Snooker players would have a distinct advantage if they were to take up the sport but it still would be far from an easy transition. There is plenty of space on the table throughout the game and this could potentially cause some uncertainty. 3-cushion billiards focuses on the cue ball and having complete control over this one area isn't easy to master. It is far from a simple game and that is one of the reasons why very few snooker players are taking the plunge. The riches of world snooker far eclipse the earnings of the top billiards players and it's unlikely that any players at their peak would swap sports but it certainly provides an interesting avenue for disenfranchised competitors or perhaps even veterans of the circuit who fancy trying their hand at something a little different.

The transition is likely to be a lengthy one and any player who expects to adapt immediately is likely to be shocked by the precision and foresight which is required to play at the top level week in, week out. However, a greater crossover between the two disciplines is a definite possibility going forward and it would be good to see players such as Ronnie O'Sullivan play 3-cushion billiards on an increasingly regular basis.

See more about crossing over to 3-cushion billiards from other cue sports here: The Feel Of It

Thanks to Joe Media and the History Channel for images that appeared in this article.